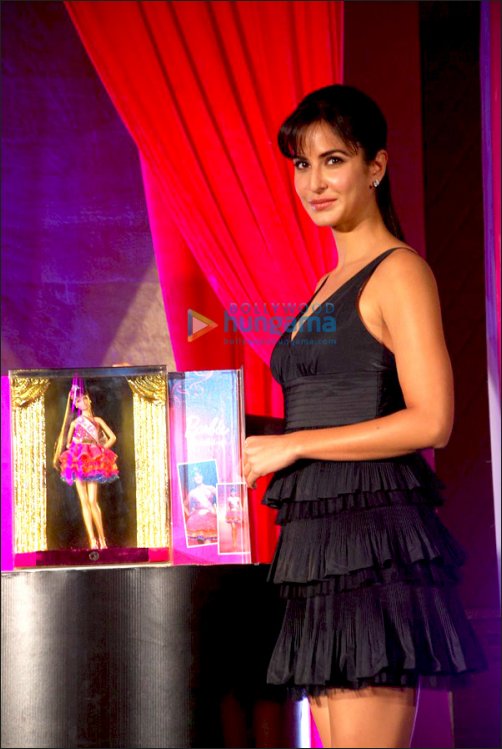 Mattel India, the global leader in toys, yesterday presented actress Katrina Kaif with a one-of-a-kind Barbie doll specially crafted in her likeness. The Barbie doll created by skilled designers captures the popular Bollywood actress' famous signature style showcased at the 'Barbie All Doll'd Up' show at Lakme Fashion Week 2009 as a part of Barbie's 50th Birthday Celebrations. Katrina Kaif is the first Bollywood icon to be crafted in the form of a Barbie doll.

In 2009, Katrina Kaif had wowed the audience at Lakme Fashion Week having walked the ramp as a real life Barbie for the 'Barbie All Doll'd Up' show. The doll in the likeness of Katrina Kaif is a special single exclusive piece in the world, featuring the winning designer outfit by young prodigy Nishka Lulla worn on the runway by Katrina.

Mattel Toys India decided to unveil this doll yesterday as a special early Christmas gift for Katrina and also to be in time to announce the further extension of their association with Katrina Kaif, by announcing the launch of another Special Barbie doll in likeness of Katrina Kaif which will be launched in 2011 as a part of Barbie's Birthday Celebrations next year.

Katrina Kaif, who was visibly excited, said, "As a child, like all young girls I too have grown up with Barbie. She has been a friend and I have shared many experiences with her. Barbie is the ultimate fashion icon and is the most popular doll in the world! She has captured my imagination for many years and now when I get an opportunity to be a part of Barbie's heritage - I am enchanted, deeply honoured and humbled as I today join the ranks of iconic women who represent Barbie's aspirational values. I am extremely grateful to Mattel for presenting me my very own Barbie doll. I hope that my young fans are equally thrilled with this doll."

Katrina Kaif joins the list with the German Chancellor Angela Merkel and Heidi Klum who have been honoured to have One-of -a-kind Barbie dolls made in their likeness to mark Barbie's 50th Birthday Anniversary Celebrations, acknowledging them as the new era icons to join Barbie's list of outstanding people and women of substance.