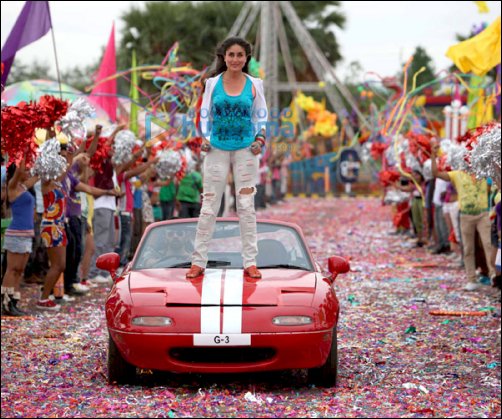 When it's a Rohit Shetty film, you can be sure of some high octane action sequences which include the likes of cars blasting, actors standing on top of moving bikes, etc. While his actors are expected to do some heavy-duty action sequences in his films, this time for his latest film Golmaal 3, Rohit Shetty decided to get his actress Kareena Kapoor also to do a dhamakedaar stunt sequence.

Kareena, who was also seen in Rohit's Golmaal Returns, will now be seen making a dramatic entry by standing on the bonnet of a moving car in Golmaal 3 Bebo insisted on performing the daredevil stunt scene herself and ended up doing the scene like a pro. Says a source who was present on the sets, "It was a very difficult scene. Not only did Kareena have to maintain her balance but she also had to get her expressions right. She agreed to do the stunt on the condition that the director, Rohit Shetty, would drive the car himself. Kareena was tied with a harness and had a support but the car was taking turns. It was quite a tough stunt."

So it was Rohit indeed who sat on the driver's seat when Kareena pulled off this amazing stunt. Bebo on her part seems to have had a ball doing this daredevil stunt sequence. Says the gorgeous actress, "I have had an absolutely fantastic time shooting for the film. The entry sequence was planned this way and Rohit explained it to me in detail. When he is around, I have nothing to worry about. In the final analysis, the shot looks amazing."

Well, we are sure fans of Bebo can't wait to watch her in her new daredevil avatar.