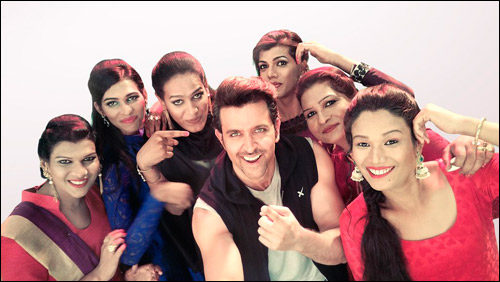 While Hrithik Roshan is going through immense stress considering the series of legal controversies surrounding his life, the actor seems to have however decided to continue to spread happiness. He will be collaborating with India's first transgender music band 6 Pack for their next single 'Aye Raju DJ Ka Music Flop Hua, Apun Ka Taali Hit Ho Gaya'.

Recently the entire team of 6 Pack shared a selfie with the superstar himself and the picture was shared on the official Twitter handle of Y Films, who will be producing the single. Despite the fact that the actor has injured his ankle, he had apparently approached the band because he was keen on being a part of the video. We also hear that he asked them to teach their signature clap so that he can do it properly. The members of the band who are thrilled to have a superstar featuring in the music video not only appreciated the sweet gesture of the star but were also happy about the way people are accepting them as a part of the society. Moreover, they were even super excited about the fact that they got an opportunity to teach dance to one of the best dancers of Bollywood.

As far as films are concerned, Hritihk Roshan is gearing up for the period saga Mohenjo Daro and his father's production Kaabil.