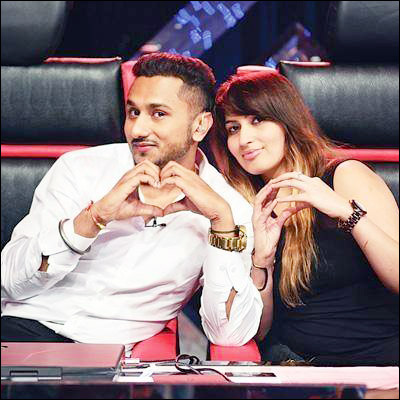 For all the female fans who have been swooning over the music of Yo Yo Honey Singh, it came as a surprise that the popular rapper had already tied the knot, however, the musician's wife had never made a public appearance before. It is now that we get a glimpse of the musician's wife Shalini as she was spotted with her hubby on the sets of his ongoing reality show India's Raw Star.


During the initial days of Honey Singh's career, he maintained a strong silence about his personal life and we hear that he had even denied being married at one point of time. However, later, Yo Yo Honey Singh finally accepted about tying the knot but never made an appearance with his wife until recently. The reason behind Shalini being present on the sets of the music reality show was because Honey Singh gave in to pressure that he was facing while shooting for the reality show. Since India's Raw Star has Honey Singh as the solo judge, we hear that the pressure got on to him and he underwent an emotional breakdown. The shoot had to be stalled and later his wife Shalini had to be called to handle the situation. In fact, it is being said that the shoot had to be delayed for four hours but finally, Shalini took charge and soon Yo Yo was back on track.


Honey Singh not only expressed his happiness over seeing his wife but also stated that she is his friend and he will always listen to her no matter what.


The episode which features Honey Singh's wife Shalini will be airing this week on the channel Star Plus.


Tags : Shalini, Star Plus, Yo Yo Honey Singh