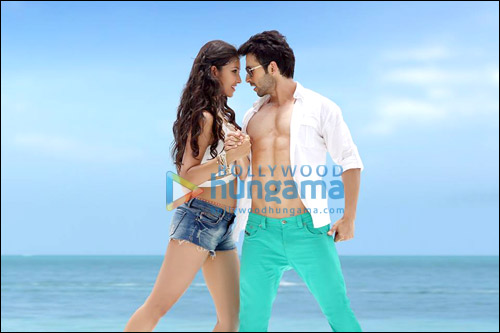 Previously we had given a glimpse of actor Girish Kumar's upcoming film with former beauty queen Navneet Kaur Dhillon and now yet again, the actor posted a picture, right from the sets of the film on a social networking site.


In all the excitement of shooting for his next film, Girish posted a picture, a romantic scene along with his co-star Navneet, which seems to be a part of a song sequence. The film is currently being shot in Mauritius and we spotted the couple in beach wear for the song. Girish opted for a 'cool' look by sporting aqua shade denims and an open button white shirt that reveal his abs. On the other hand, Navneet opted for hot pants and crop top instead of bikini and flaunted her svelte frame.


Produced by Vijay Galani, the untitled film is directed by Vaibhav Mishra. The film is a contemporary love story which will be extensively shot in Mauritius, London and will later have schedules in Manali, Delhi and Mumbai.