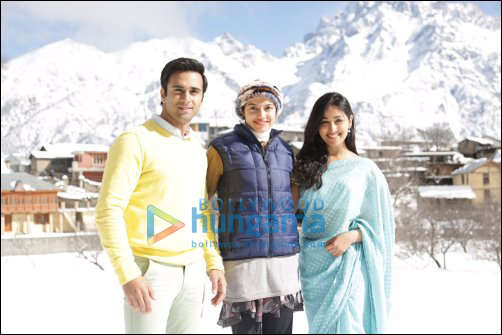 Filmmaker Divya Khosla Kumar's upcoming romantic drama Sanam Re, unlike many other Bollywood films, will be shot only in Indian unexplored and exotic locations. Divya feels that this will provide authenticity to the story of the film.

Divya says, "I feel as an Indian filmmaker, it is my responsibility to bring out places of India which are unseen as we have so many hidden gems yet to be explored. People go to Canada and other places where they say wow, it is so beautiful. When they see actual India they would realize that our country is more beautiful than any other place in this world. I try to promote Indian locations in my films. For Sanam Re, I did a lot of research on locations, as they add to the layers to the film. It speaks a lot of emotions, so a correct location is very important to portray a film."

A romantic film is not complete without a snowfall. Divya explains on zeroing on a cold location. She says, "The script of this film demanded a cold location. We shot in Kalpa, a small town in the Sutlej river valley in Himachal Pradesh, which is never seen on big screen before. We had created a mall road set as well as a set of a small town called Tanakpur in Chelsea. We also shot in Bishop Cotton School."

Adding further about the location Divya says, "Tanakpur is a fictitious town, I wanted to create a sleepy town, where there is not much habitation, and the commercialization has not really popped in. So this town is very untouched and beautiful. Even at the village where were shooting the locals were conducting gram panchayat. The people were very nice."

When the cast and crew of Sanam Re reached Kalpa, there was no snow which left them in a dilemma since snow is an integral part of the film. Divya says, "Apparently every year in December it snows in Kalpa, but this year it didn't snow. I told everyone in my unit to pray in Mata ka Mandir for snow and they did it. So the next day the snow started falling by three in afternoon and by night the place was fully covered. It was looking heavenly."

But shooting in such location can be a daunting task. Divya says, "We had to face many challenges shooting as Kalpa, is eight hours away from Shimla and there temperature was minus 10 degree Celsius. It was very cold. We faced a many problems; there was no water in our hotel, so we were given water in buckets. For four days, it was very tough to shoot. As there was no drinking water, we had to carry a truck full of water to drink to the place where we were shooting. It looks like heaven but has a poor infrastructure. Every day we had to walk five kms in snow to reach the spot where we had to shoot."