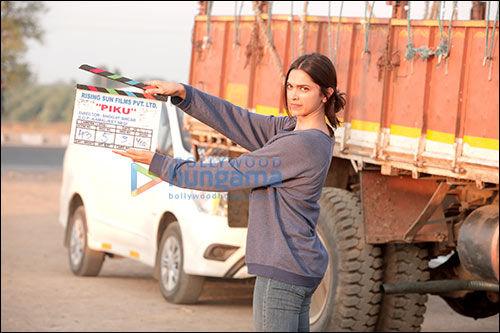 Amitabh Bachchan, Deepika Padukone and Irrfan Khan seem to have bonded well during the shoot of their upcoming film Piku. While Deepika Padukone has played the doting daughter to Amitabh Bachchan before in Aarakshan, this will be the first time she is being paired with Irrfan Khan. The actress who is known for her lively nature on the sets decided to don a different role during the shoot of Piku.

Deepika Padukone was spotted in a de-glam avatar, holding a clapperboard for a take while shooting for a particular scene in Piku. Moreover, the actress turned out to be a complete prankster and even faked an argument with Irrfan Khan which left the entire crew in shock. Seeing the state of the crew members and their director Shoojit Sircar, Irrfan Khan and Deepika Padukone decided to reveal the truth and later, burst into laughter.

Produced by MSM Motion Pictures in association with Saraswati Entertainment and Rising Sun Films Production, Piku is slated to release on May 8, 2015.