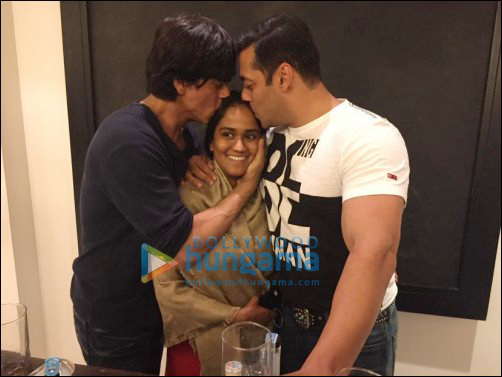 If one was to probe into the thing which the world of Bollywood was keen to see, then we are sure that would been the coming together of the two rival Khans viz., Salman Khan and Shah Rukh Khan. Even though the politician Baba Siddiqui 'attempted' to patch them up twice in a row, many dismissed this nothing more than the two actors being courteous to each other.

But eventually, it took Arpita Khan to actually achieve the impossible. Arpita for starters, is Salman Khan's darling sister and has been in the news lately because of her upcoming wedding. The Khan family (esp. Salman) is sparing no efforts to make this affair a memorably lavish one. Meanwhile Arpitatoo has managed to achieve the impossible by getting Salman and Shah Rukh together. She even shared her excitement on Instagram by posting the image of Salman and SRK hugging her. And going by the 'body language' of the two Khans, it is very clear that the feelings and love for Arpita is simply out of this world.

This image is exactly what one would call as 'A picture that speaks a million words'.