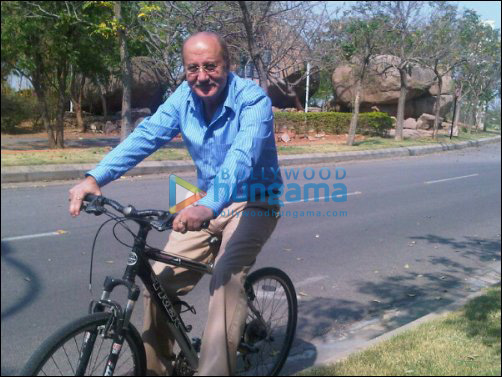 They say 'Life comes full circle'. Well, it couldn't have been truer in the case of the legendary Anupam Kher. He started of his career at an age of 20 something, by playing a 70 year old man named B.V. Pradhan in the iconic film Saaransh.

Well, Anupam is now (yet again) playing the lead in a film called Buddha In A Traffic Jam, (not to be confused with the Big B-Sonu Sood starrer Bbuddah). Kher plays a character called Prof. Batki. He recently tweeted his image from the movie sets. The USP of this film is that it's being made by four students of ISB (Indian School of Business) and is being directed by Vivek Agnihotri. The film also stars Arunoday Singh, Mahie Gill, Pallavi Joshi in prominent roles. Earlier, Vivek had told Bollywood Hungama that the film is a hard hitting political thriller that's based on true stories.

Whether the role of Prof. Batki will do the same wonders as that of B.V.Pradhan to Anupam is what remains to be seen!