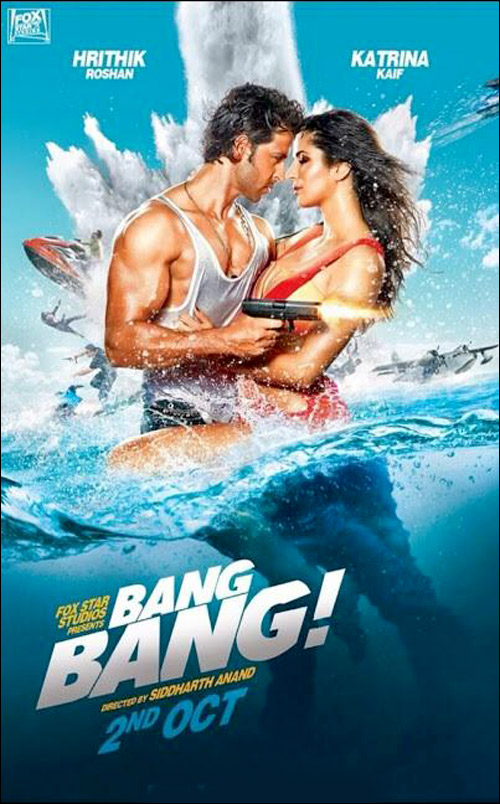 The Bang Bang dare started by Hrithik Roshan seems to have gone viral on twitter and celebrities are sportingly accepting the dares that Hrithik Roshan has been giving them. After celebrities like Ranveer Singh, Nargis Fakhri, now it is filmmaker Homi Adajania and his wife and designer Anaita Adajania who not only accepted the challenge but also passed it with flying colours.

Filmmaker Homi Adajania who is riding high on the success of the Deepika Padukone, Arjun Kapoor starrer Finding Fanny was asked to recreate the poster of Bang Bang in his own style along with his wife Anaita Adajania. Hrithik posted on his Twitter handle saying, "wildest,craziest 4 d sexiest, beautiful n my love @Anaita_Adajania n @homiadajania recreate poster in ur own style!"

Taking it in the right spirit, Homi created a funny poster, rather a spoof of kinds, where the director took a humorous dig at the ongoing trend of flaunting abs by bloating himself in the poster and posted a rather sexy picture of his wife Anaita in a red dress with cut outs. Homi posted it saying, "@iHrithik worked my ass off on this 1PACK just for you! LOVE #bangbangdare @Anaita_Adajania @FullMoon24x7 #BangBang". Supporting her husband, Anaita too expressed her love for Hrithik by saying, "My love @iHrithik your wish is my command! U #bangbangdare I bare! #BangBang rocks!! @homiadajania #marchingants."

Hrithik Roshan too was obviously happy about the way Homi Adajania creatively made a different poster of Bang Bang and applauding his efforts, the actor said, "Aaahahha!!!!!! Anaita Kaif homi Roshan 4 bbbanged!!! Unbelievable!!check them out!! @Anaita_Adajania @homiadajania"

Produced by Fox Star Studios and directed by Siddharth Anand, Bang Bang also stars Katrina Kaif, Danny Denzongpa among others and it is slated to release on October 2. The film is the official remake of the Tom Cruise and Cameron Diaz starrer Knight and Day.