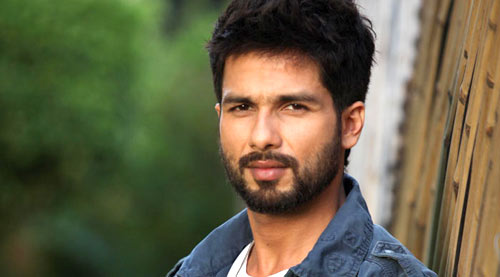 As you gear up to commit celluloid suicide with the release of
Haider, I fail to fathom the reasons behind this fallacy. While you have been one of our most memorable chocolate boy heroes thanks to your films like Ishq Vishk, Chup Chup Ke and Jab We Met, your gradual progress to a darker and brooding image a la Kaminey was much appreciated. However, the recent past has not been kind, especially with your releases like Mausam, Teri Meri Kahaani, Phata Poster Nikla Hero and Râ€¦Rajkumar that somehow missed their mark at the box office.

After the debacle last year, we have been pining to see you back on screen playing the sweet boy next door again, but what we get is a half bald and crazy Shakespearean inspired Haider. At this point, not questioning the filmmaking capabilities of Vishal Bhardwaj, I wonder why you chose such a script, keeping in mind that the Indian audiences, who are relatively unaware of Shakespeare's plays, will find it hard to relate to an adaptation of one. But then again Kaminey that also featured an offbeat story did well.

Sadly, unlike Kaminey that was a somewhat solo release, Haider will have to compete with a giant in the form of Bang Bang, wherein lies one of the biggest obstacles your film faces. Bang Bang, which is an official remake of the Hollywood film Knight and Day featuring Tom Cruise and Cameron Diaz, promises to have all the western action combined with the Indian melodrama. Adding to it further is the fact that both the lead actors of the film Hrithik Roshan and Katrina Kaif have been on a career high with Zindagi Na Milegi Dobara, Agneepath, Krrish 3 and Jab Tak Hai Jaan and Dhoom 3 respectively, certainly making it an uphill task for Haider.

However there is a silver lining, and this time it's Shraddha Kapoor, who has been rather successful with Aashiqui 2 and Ek Villain making it big. But the question still remains will her success be enough to entice the audiences?

Another factor that will seriously play a big role in Haider's overall success is the film's promotions. Given the fact that Bang Bang already stars actors on top of their game, the film has been much talked about, thanks to Hrithik Roshan's honeymoon with the media with his marriage to Suzanne going kaput and the astronomical alimony she seeks. However Haider, has hardly been spoken about except for the cuts and its rating by the censor board. Thanks to this, Bang Bang has a massive start in terms of film promotion with the film's name already being known by the audience. Now considering the above and the massive number of screens that the makers of Bang Bang will ensure, Haider will be audience's second choice right from the onset, a factor that is more than damaging to any release.

However like in every disaster story, there is always an escape route, in this case the five day extended weekend the film will enjoy. With most of your fans preferring to look the other way and concentrate on the collections made in this period, I will have a lot of people saying that I am wrong, but when analyzed on face value, Haider, which could earn a neat Rs. 50 crores (approximately) over these five days to lifetime, could have earned much more had it been a solo release.

Not forgetting the fact that good word of mouth and a tight script and screenplay will go a long way contributing to the overall collections.

On a positive note though, the trailer of Haider that released a while back has managed to generate a bit of interest among the audiences. But this will have to be heavily backed up with positive reviews and obviously good promotion.

So here's wishing you all the luck for your release Haider, hoping that your film will generate decent collections and stand tall at least through the first weekend.