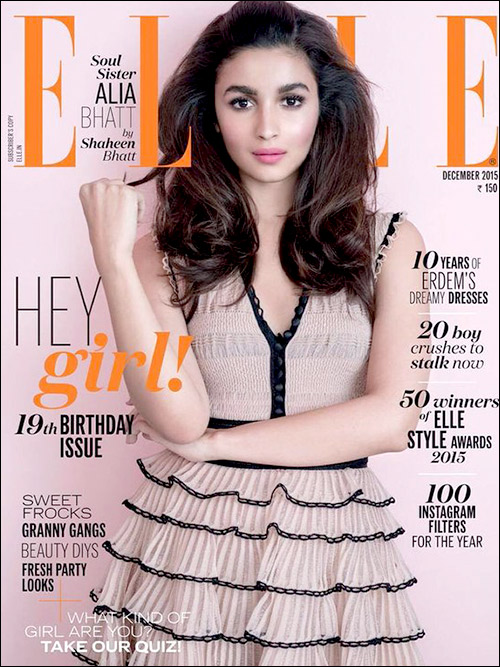 Acclaimed performances, style and a massive fan following has given Alia Bhatt the kind of stardom that is rare to receive at such a young age amidst the cut throat competition. Last seen in Shaandaar, Alia Bhatt now features as the cover girl for Elle India's December Edition.

Alia Bhatt opts for an adorable, tiered frilled Alexander McQueen dress for the cover and the pink blush and matching pink lips add to the cute girl next door look. This 19th anniversary edition has Alia Bhatt being interviewed by none other than her sister Shaheen Bhatt for the magazine. Not many may be aware that Alia's sister Shaheen likes to write and will soon be working with Mohit Suri for the script of a Bollywood film. On the other hand, Alia Bhatt is gearing up for a handful of releases in the upcoming year which includes the Shahid Kapoor, Kareena Kapoor Khan starrer Udta Punjab, Ayan Mukerji's next starring Ranbir Kapoor among others.

Besides the interview of these 'Soul Sisters' as Shaheen likes to call, the magazine also features many articles on trendsetting fashion along with a lowdown of winners of the Elle Style Awards 2015 as well as exploring the features of the picture sharing site Instagram.