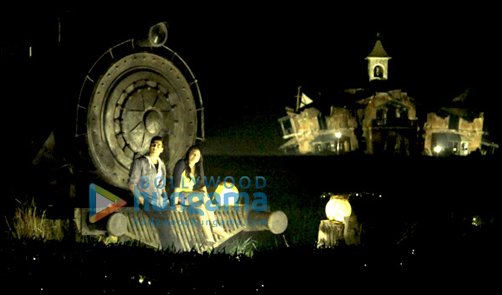 Looks like the fantasy world of Joker would indeed turn out to be a reality soon. If this exclusive image from Joker is any indication, the film is indeed stepping into a world hitherto unseen.

While Akshay and Sonakshi seem to be enjoying their romantic rendezvous on a night out, the castle backdrop makes for an intriguing view. Since the film is current times, it is expected to have a contemporary setting to it. However, since Shirish Kunder and his art director (Late) Samir Chanda had envisioned a fantasy setting for the plot, this is yet another indication of inspiration from Hollywood director Tim Burton who has to his credit films like Alice In Wonderland, Charlie And The Chocolate Factory and Sleepy Hollow amongst others.

When contacted, Shirish confirmed that the castle forms an important part of his Joker. "This is Akshay's ancestral house in the film where his brother (Shreyas Talpade) and father (Darshan Zariwala) live."

Regarding the engine, Shirish says that it was entirely the creation of Samir Chanda and it is to his credit that it looked like a real one.

"Credit to Samir who put this all together in 12 days flat", Shirish gets nostalgic here, "We rented good 50 acres of land in Chandigarh to create this fantasy world and Samir ensured that the lavishness stood out."

Incidentally, this is also one of the last creations of Chanda who met with a sudden death last week.