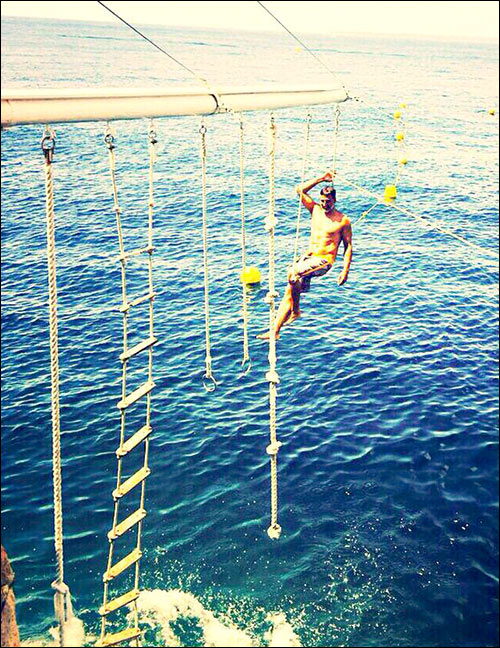 What can we say about Akshay Kumar and stunts? True to the title 'Khiladi', the actor is known for his high octane action sequences, so much so that he refuses to use a body double in many scenes in the film. Also, readers may be aware that even in real life, Akshay Kumar is an adventurous person by nature and the actor decided to try out some new stuff while on a vacation with his wife at the French Riviera.


Earlier, we had reported that Akshay Kumar decided to take some time off to spend some quality time with his family especially with his wife Twinkle (fondly known as Tina) and the duo were spotted having some fun at Nice in France. Now, giving a glimpse of his fun filled holiday trip, Akshay Kumar took to Twitter whilst he was trying a new water sport at the coast in the city. The actor was seen climbing a rope located right above the sea, from where he was suppose to dive into the water and swim to the shore. Fascinated by this new adventure sport, the actor spoke about it on his Twitter handle, saying, "My idea of fun...climbing some ropes at the French Riviera :) It's a top of the world feeling indeed! #sportsjunkie".


On the other hand, Akshay Kumar will soon be back in town to promote his upcoming film Brothers. The actor for the first time has worked in a Dharma Production film and has shared screen space with Sidharth Malhotra, who plays the role of his younger brother. Brothers also stars Jacqueline Fernandez, Jackie Shroff and is the official remake of the Hollywood blockbuster Warriors. The film is slated to release on August 14.