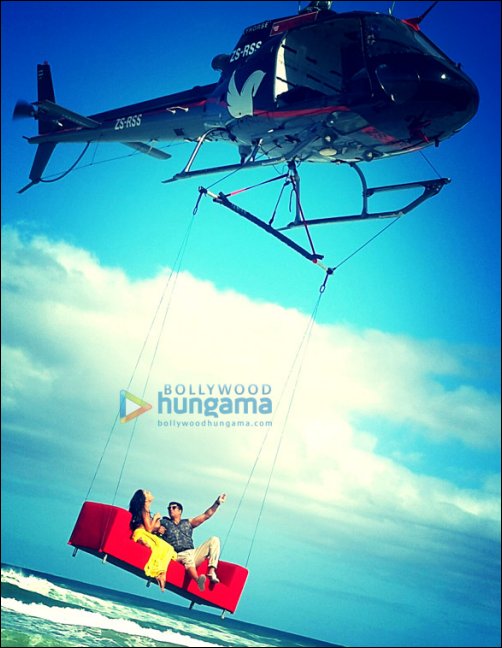 A classic film of the 80s, Shaukeen had 3 lecherous men wooing the pretty bar dancer played by Rati Agnihotri. Attempting to add a twist to this film is Akshay Kumar by remaking it and re-titling it as The Shaukeens. The film which went on floor recently will also have some stunts performed by the leading actors unlike its original version.


The Shaukeens is said to feature a scene where actress Lisa Haydon and leading man Akshay Kumar are sitting on a couch hanging mid-air and the stunt has taken many by a surprise. In fact, we have learnt that unlike the other scenes which take the help of VFX, this scene was actually created with the help of a chopper which was hoisting the couch. The idea of this scene came from Akshay Kumar who had previously seen something similar in the popular comic series 'Tom and Jerry'. The actor was left so impressed with the shot that he insisted on putting it as a part of the film.

Revealing some more about the scene, director Abhishek Sharma stated that the scene was shot amidst a beautiful beach in Cape Town. He also claimed that while he was freezing in the weather despite being fully clothed, his lead pair performed the scene effortlessly even in their summer wear.

Describing it as a bizarre sequence, Lisa stated that Akshay Kumar had come across this scene while watching the Tom and Jerry series along with his kids.


The Shaukeens initially had Nargis Fakhri playing the lead but the actress quit citing date issues after which Lisa Haydon was taken on board. The original cast included Mithun Chakraborty along with Ashok Kumar, Utpal Dutt and A K Hangal along with Rati. On the other hand, the remake also stars Anupam Kher, Paresh Rawal and Annu Kapoor in prominent roles and it is slated to release on November 21, 2014.