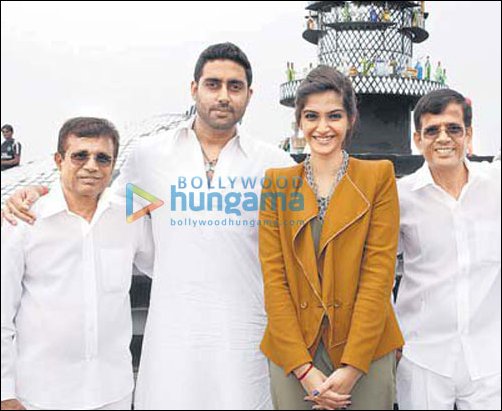 Any film in Bollywood, these days, can never survive without its share of controversies, which has, become a must-have for the film to do brisk business, at least in the 'initial' days. But then, there are also a decent set of filmmakers who do not resort to such cheap and cooked up controversies, as they let their film do the talking.

One such director duo is Abbas-Mustan aka the 'Men In White'. Unlike their previous films, their upcoming project Players, which is the remake of The Italian Job has been marred in controversies, pertaining to the flip-flop of its heroines. The latest update is that the film stars Abhishek Bachchan, Sonam Kapoor, Bobby Deol, Neil Nitin Mukesh, Omi Vaidya and Bipasha Basu and the cast is currently busy shooting for the film in Goa. This will be Abhishek Bachchan and Sonam Kapoor's second film together after Delhi 6. Here's one image from the sets of film that is floating around the web.

The film will be releasing next year.