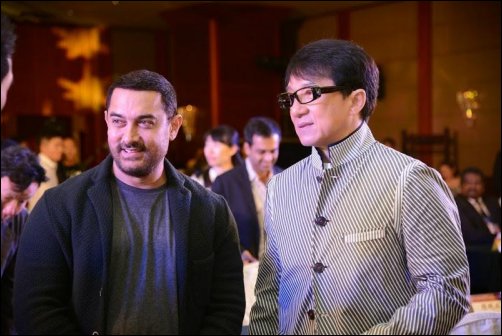 What happens when two iconic superstars from two different countries come together? We get a picture worth millions! Something similar happened during the premiere of PK that was held in China on Wednesday.


The premiere of Bollywood's biggest blockbuster PK was a star studded event in the country and amongst some prestigious personalities from the Chinese film industry, present at the event was none other than global superstar Jackie Chan. The action legend graced the event held at one of the most famous locations, Shanghai Art Center and also made sure to interact with the 'hero' of PK, Aamir Khan. Not just that! From what we hear, the two were all praises and even congratulated each other for their films. While we all are well aware of their love for cinema, films were supposedly the central point of their discussion. It is also being said that Jackie Chan was very impressed with Aamir Khan's performance in PK and even conveyed the same to the actor.


Earlier we had reported that filmmaker Rajkumar Hirani too will accompany Aamir Khan for the premiere. PK, also starring Anushka Sharma, Sanjay Dutt and Sushant Singh Rajput, releases in China on May 22 and will have a widespread release in over 3,500 screens