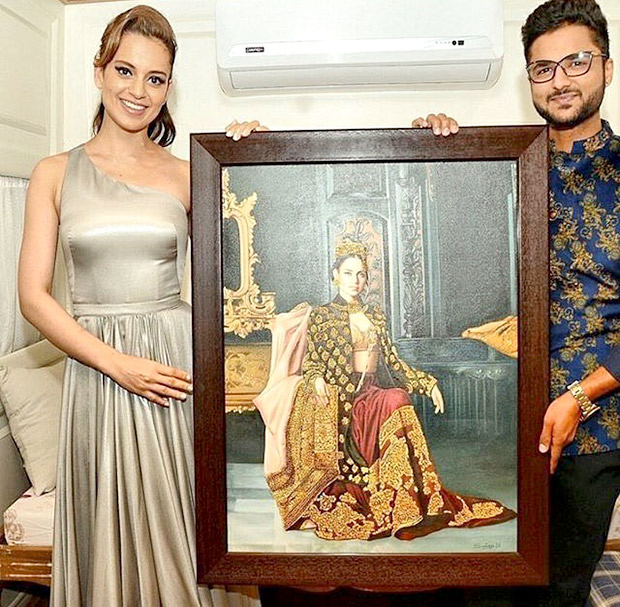 Kangna Ranaut who earned fame with the much talked about film Queen was truly picturized as an actual queen by none other than artist Suvigya Sharma. The artist recently painted a beautiful portrait of the actress in a royal queen avatar and even presented it to the star.

Suvigya Sharma has previously painted pictures of many pretty Bollywood actresses including Rani Mukerji. Referring to her film Queen, Suvigya thought it would be a great idea to paint Kangna Ranaut in an actual ‘queen’ avatar for his portrait. Comparing it to the painting of Rani which was said to be vibrant and colourful, the painter mentioned that he was looking for something paler for Kangna but it was the European touch that was of importance for this particular portrait.

Talking about the painting, Suvigya revealed that it had a 24 karat gold embossing on an oil canvas. The work has over three and a half mm layer and the portrait measures 3.5x2.5 ft. The artist was also all praises for Kangna whom he found as fun-loving, easy going and very patient. He was appreciative of the fact that she gave him time to develop the work and did not ask him to rush into finishing it.

On the film front, Kangna Ranaut is all set to play a real life queen in Ketan Mehta’s ambitious film Rani Laxmibai.