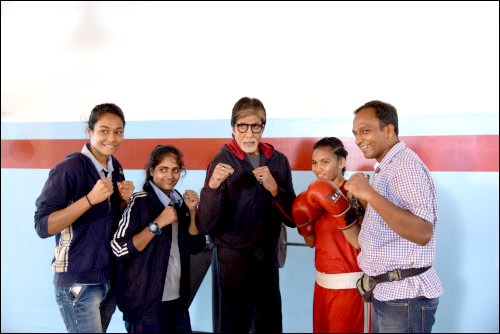 Bollywood's eternal superstar Amitabh Bachchan, recently, put on his boxing gloves and shot with real-life national-level boxers for an upcoming project. Not just that, Amitabh Bachchan, as always, also shared on his blog, photographs of himself accompanied by the boxers in the boxing ring.

On his famous blog, Amitabh Bachchan wrote, "And so we move indoors for the work on shoot and among set ups that take me back to School and PT days, when boxing was compulsory, or it was made out that way .. if you fought in the ring you gained a point for your House .. and eventually added up to the winning of the Cock House at the end of term ; a most prestigious reward. So we entered, and got pasted and walloped and hit and hit back and came back to it years and years later as a must for all .. a learning of life .. in the ring you are all alone with the adversary .. outside people cheer and shout and encourage and support .. but no one comes in to help .. you fight your battle alone .. it is good to have support and cheer and encouraged well wishers .. but in the end we all know it is a lonely war .. a fight with life that we shall all face someday and all have to address it alone." 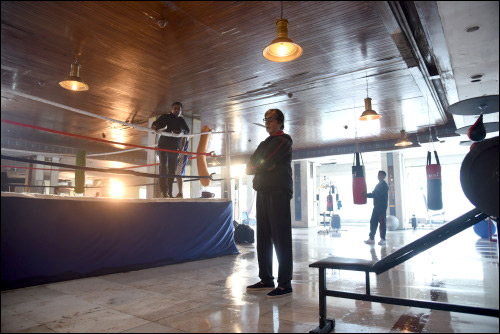 Continuing his nostalgic trip, Amitabh Bachchan wrote, "Unless you get hit, you shall never know the impact of what it means to fight back .. and until you fight back you shall never know the joy of victory .. In Sherwood I lost in the boxing tournaments .. but I won a cup for being the Pluckiest Loser .. a plucky loser was an acknowledgement for putting up a fight which I almost won, despite the fact that I was up against one that was stronger .. my height would go against me in the count downs for which category I belonged .. so even though my weight was for a lower category, my height used to put me in a higher weight and better and stronger opponents .. they warned me to withdraw, for they feared physical damage to me .. but my PT instructor disagreed and I fought .. It may never be possible, why may , it will never be possible to win always .. but it shall always be possible to let the opponent know that you have enough 'pluck' within you to give him a fight .. he must know that he will be hit as well, and he must be prepared for it .. it is important for the other to know that he will bruised as well , black eyed, bleeding nose and all. I may go through the same - bruise, black eye, bleeding nose - perhaps more than the opponent .. but the opponent must contend with what I go through as well. In a fight the opponent must be prepared for that as well ... The damage could be physical .. but in most times it is metaphorical too .. it may take time, but it does happen .. the bruises with time I believe are the ones that have greater and lasting impact .. trust me ..!!".

On a professional front, Amitabh Bachchan will soon be seen in Shoojit Sarkar's PINK, an untitled project with YRF and Ram Gopal Varma's Sarkar 3.