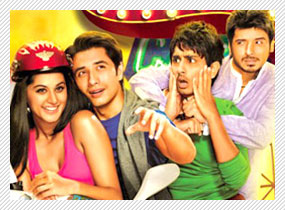 Though one continues to hear about some of the New Age actors beginning a film only after receiving a bound script in hand, the youngsters who are a part of Chashme Baddoor didn't enjoy any such luck. Veteran director David Dhawan, who is the only one still around after making 40 odd films, has his own approach of making films, which involves getting spontaneous reactions from his actors. The same was followed by him during the making of Chashme Baddoor as well.

"Mr. Dhawan has a certain way of working", informs Divyendu Sharma, one of the three leads in the film, "Yes, he did have a bound script but then he doesn't believe in giving it to his actors. Now I come from FTII and have a theatre background which means I have always worked with a script. However for Chashme Baddoor, there was no script for me. Although I had heard the narration, still I needed time to work on the lines at least. I kept on asking for the script but David sir said 'tu chinta mat kar'. Arrey kaise nahi karta? Aakhir mere jaise naye aadmi ko chinta to hoti hi hai", quips Divyendu.

What started as a jest ended up resulting in some nervous moments for the actor as there was no sign of the script till a couple of days before the start of the film's shoot.

"I was a little afraid and asked him if I could now get the script at least. He was cool and calm as ever and advised me that in his films, there is nothing that an actor can actually prepare. He just wanted me to spontaneous and go by his vision", Divyendu reveals, "Now when a director says something like this himself and that too in as plain and simple way as possible, I was bound to feel much more confident. More than half my tension went away."

Remaining tension was eradicated when the team finally started shooting for the film.

"David sir's handling of actors is so immaculate that you go by the flow without even knowing that you are being handled by someone", he confesses, "We didn't even realize when the film shoot began and ended. It was a smooth walk on the sets. We had one big paid holiday."