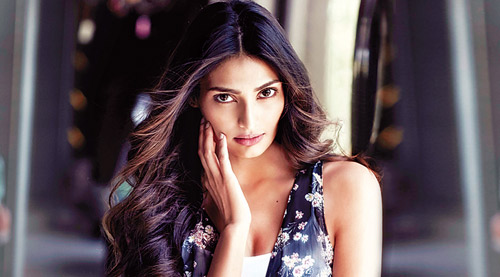 Athiya Shetty's wait is finally over. Her maiden movie Hero is out. And the verdict as far as reviews are concerned, is not too good.

Sighs Athiya, "The critics have not liked the film. But we are not surprised. Hero was not made for the critics. If you've seen the original Hero-and I saw it when I was very young-it's a full-on massy film. We aimed to make that kind of a film."

Sounding mature way beyond her years Athiya says, "Though I never visited my Dad's sets I grew up on a staple diet of Hindi films. I love the massy films. I am glad I made my debut in one of those."

Athiya Shetty is all praise for her producer Salman Khan and director Nikhil Advani. "And I am not saying this because one is a superstar and the other is a super-director. I feel both Sooraj and I are really blessed to have been given their guidance. If not for them, where would we be?"

The promotion and marketing of Hero has been especially enlightening process for Athiya. "In the past two months that I've travelled everywhere, I met the most amazing people. It's all been like a dream."

It's time now to plan her career ahead. "So far it was Hero all the way. Now I can look at the other offers that have come my way. I've my wish-list of directors that I want to work with: Imtiaz Ali, Sanjay Leela Bhansali, Vikas Bahl, Vikramaditya Motwane...'

Athiya Shetty wants to do dark intense film. "I've just started. There is so much to learn so much to absorb and achieve. Hero was a dream launch. I loved my character Radha. And though I had seen how Meenakshi Sheshadri had played her in Hero, I wanted to make the character my own."

Athiya is now waiting to see how Hero pans out at the box office. "If it doesn't click I'll need to work hard. If it clicks I'd need to work even harder. People think a career is much easier for star-children. And to a large extend it's true. Sooraj and I did get a head start with Hero. There are so many talented young people out there who don't get the same opportunity."

Finally we ask about her high cheek bones which everyone is talking about. "Oh, I've inherited it from my mother," she laughs, looking pleasurably at a rosy future.