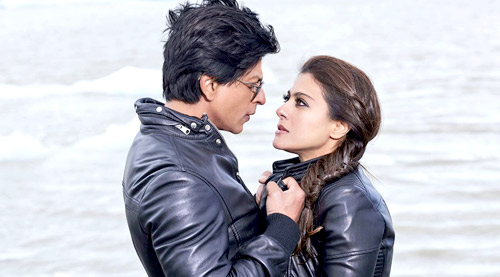 While Dilwale, all things considered, has done modest, possibly break-even-in-the-final-analysis business, a lot of the hype around it-both promotional and post-

release-deals with the return of the iconic pair of Shah Rukh Khan and Kajol. The pair has even been credited with a lot of the success of the film, notwithstanding SRK's star-power, Kajol's loyal

An enthusiastic section of the media has set this film as the pair's first release in 14 years (read Kabhi Khushi Kabhie Gham...), whereas the actual gap was a bit more than five years (My

So, by that logic, My Name Is Khan should have been a blockbuster, which it was not, at least in India. Overseas, every SRK film has either made money or been a complete blockbuster. But at

home, it actually flopped, despite the controversies generated around it.

Yes, we can buy one argument-that Dilwale was the first entertainer from the pair in 14 years, and the title (that was given by Rohit Shetty only because Kajol accepted the

film) was reminiscent of their cult hit Dilwale Dulhania Le Jayenge, on which the current and vocal section of GenY have grown up as their cult film and love story. Baazigar (1993)

was SRK-Kajol's first film together, followed by Karan-Arjun and later Kuch Kuch Hota Hai. All three were also blockbusters.

(As a side, let's not forget that there was a super-hit called Dilwale in 1994 starring Kajol's husband Ajay Devgn, which also kick-started Suniel Shetty's and Raveena Tandon's hit streak.

And Kajol quipped that the "D" of her Dilwale stood for Devgn!).

However, to come back to facts, star-pairs do not generate that kind of box-office pull once they return after a gap. As analyst Vinod Mirani quips, "The initial peak phase of a team is like the

romantic passion in the honeymoon phase. Things cannot just be the same after 10 or more years!"

Even here, the SRK-Kajol pairing is an exception, because they are yet not in the league of character artistes, the way the hot pair of Anil Kapoor and Madhuri Dixit would have been had she

accepted Shefali Shah's role in Dil Dhadakne Do. Two more pairs that we would love to see again are Anil Kapoor and Sridevi and also Govinda and Karisma Kapur. Sadly, all four are in the

no-man's land of being neither saleable solo stars and pairs nor proper (age-wise) character artistes.

Past pairs that tried to re-ignite passion were Amitabh Bachchan with wife and hit co-star (even after marriage in films like Abhimaan, Chupke Chupke, Mili and Sholay) Jaya Bachchan

with Kabhi Khushi Kabhie Gham..., which proved a hit. Here, the star-appeal that contributed to the film's success were of Shah Rukh Khan-Kajol and Hrithik Roshan-Kareena Kapoor Khan. The

older couple was admired, did contribute to the content of the film but not to its star-draw. For Amitabh, it was his consolidation of his character innings after Mohabbatein.

Two more married couples with a hit record also came up croppers: Dharmendra and Hema Malini, who had failed to get a single hit after their marriage in 1980. The 1987 Jaan Hatheli Par, the

1996 Aatank and the 2011 brief cameos in Tell Me O Kkhuda did not connect at all, though in all honesty they were terribly substandard movies.

Rishi Kapoor and Neetu Singh came together four times between 2009 and 2013, with full-fledged roles in Do Dooni Chaar and Besharam. Both films lost money and the former won acclaim,

but the pair was never as hot as they used to be. Their loyal fans were content, however, with their customary cute quotient and comfortable chemistry.

Akshay Kumar and Priyanka Chopra was a team that impressed with all four films (Andaaz, Mujhse Shaadi Karogi?, Aitraaz, Waqt-The Race Against Time), but as the last of them released 10 years

ago, we cannot really call them a hot pair should they ever rejoin forces-this even though both are in very strong positions even today, individually.

The same goes for another pair that was loved without any major solo hit collaboration-Hrithik Roshan and Kareena Kapoor Khan. Two or three years back, they were to return together after 2003's

Main Prem Ki Deewani Hoon, but nothing came of it. However, if at all they do come together now, the film's merits will decide the outcome.

Clearly, like stars, directors and composers, screen pairs too have a time-bound innings that include a rise, a peak and a fall. After that, success or failure is incidental to the pair. And we

would like to believe that of Dilwale as well.