Last Updated 22.01.2022 | 11:38 AM IST
feedback language
follow us on
Bollywood Hungama » News » Bollywood Features News » Bunty Aur Babli 2: “Siddhant Chaturvedi is one of the most exciting talents that the industry has chanced upon” – Saif Ali Khan

Saif Ali Khan plays the role of the original Bunty in the completely rebooted big-ticket family entertainer Bunty Aur Babli 2 and he is heaping praise on the young Bollywood actor Siddhant Chaturvedi, who is playing the new Bunty – a super slick, big city conman. 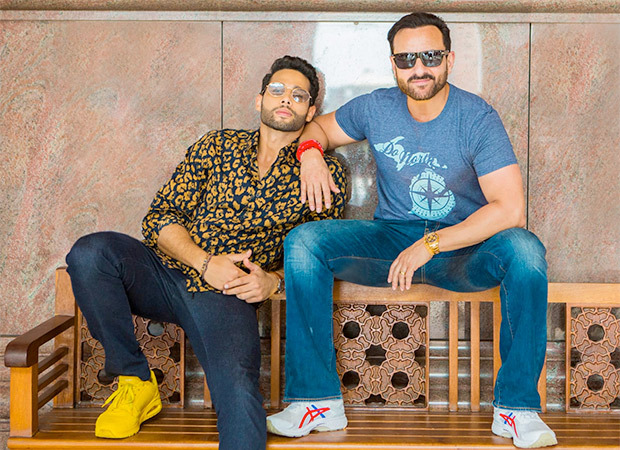 Saif says, “Siddhant is a star, no question about that. For someone so young to have the screen presence that he has and the acting maturity that he exhibits, he is definitely one of the most exciting talents that the industry has chanced upon.”

He adds, “We have to credit Zoya Akhtar for discovering him for Gully Boy and Adi for believing that he can be a quintessential hero in a comedy genre which is one of the toughest for any actor to crack.”

Saif reveals that Siddhant is natural in front of the camera and that he was born to be an actor. Saif’s review of Siddhant as Bunty is out – it’s a huge two thumbs up!

He says, “He is fantastic in Bunty Aur Babli 2 and he lights up the screen with his performance and persona every time he comes on screen. This film will showcase him as a masala Hindi film hero and from what I have seen of him, he thoroughly relishes being one.”

Yash Raj Films’ Bunty Aur Babli 2, which is set to release worldwide on November 19, 2021, is a rib-tickling comedy that will pit two sets of con artists, from different generations, against as they show their mastery over disguises to outwit each other. It will also star Rani Mukerji as the OG Babli and gorgeous debutant Sharvari as the new Babli – a hot, sassy, drop-dead gorgeous con-artist from a big city. Bunty Aur Babli 2 has been directed by Varun V. Sharma.