Over the past two years, just like the rest of the world, pop titan BTS has been at their home ground, away from fans and performing in studios and stadiums without an audience. The torrid time truly made them sort of forget the madness that is the stage. Though they had their fan meeting in celebration of their eighth year as a group in June 2021, a hard-core concert had not taken place in a year. But, that came to end with BTS – Permission to Dance on Stage on October 24 at the Seoul Olympic Stadium. The South Korean juggernaut successfully wrapped up their online concert on Sunday which amassed viewers from 197 countries/regions. Not having seen a massive crowd since their Love Yourself: Speak Yourself tour in Seoul since 2019, it was a full-circle moment for BTS to have performed their (for now) last online concert before they mark the grand beginning of the act’s new tour series in Los Angeles with the audience in attendance. The band unleashed the energy and anticipation for their first concert in a year. 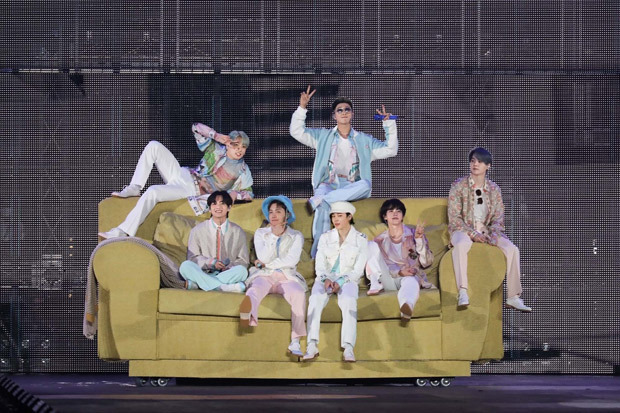 Featuring 24 songs including ‘ON,’ ‘DNA,’ ‘Life Goes On,’ and ‘Butter,’ the concert unfolded a story of five independent chapters organized around the songs’ distinctive styles. A change in stage set-up followed the turn of each chapter to highlight the versatility of styles embraced by the act. After opening with a mesmerizing dance performance on a stage set behind bars, special effects and an enormous LED screen soon drew the audience into action-packed performances of ‘Black Swan’ and ‘Fake Love.’ New band versions of ‘Boy With Luv’ and ‘Dynamite’ presented a refreshing spectacle, segueing into a performance of ‘Telepathy’ perfected by intricate details of balloons, confetti, and a moving vehicle on stage. For the show’s finale, the septet staged an upbeat performance of ‘Permission to Dance’ and relayed the much-needed message of hope to the global community.

Known for their massive stage setups, powerful live vocals, and enchanting stage presence, BTS kicked off the show with a visually stunning VCR which sort of felt like a prequel to ‘Butter’ as they were all handcuffed in an interrogation room. The stage was set with the group showing their more mature looks on stage as tracks ‘ON’, ‘Burning Up (Fire)’ and ‘Dope’ displayed their enigmatic choreography which definitely left the fans gasping. And, this was only the first 15 minutes of the concert. Let’s be honest – if times were different, this would have been a sold-out show, BTS would have to put out several more dates and still, it wouldn’t be enough since this fandom has grown 100 fold in the last 2 years itself. 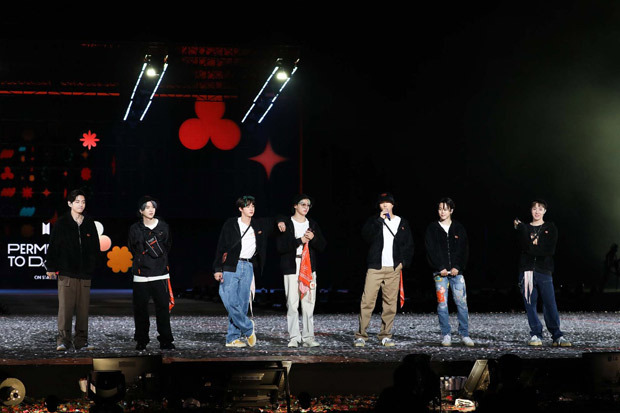 The stadium had flames, fireworks, dancers, a diverse live band, and the energy of BTS. The VFX was encapsulating. RM, Jin, Suga, j-hope, Jimin, V, and Jung Kook’s live vocals truly made you appreciate the effort that was put into this concert. What was different about it? It was all dance tracks after another, with no solo stages for members to rest. V had to take a break from the performances due to pain in the calf muscles. He was in his full-form bringing his compelling charm, commanding the stage, everyone’s attention with his strong vocals and beyond for the fans. V said at the begging of the show, "Please do not worry too much about my health condition. I am really fine. Let's get started." Whether it was Jin's honey-like vocals, Jimin and Jung Kook’s adlibs, or RM, Suga, and j-hope’s fierceness and charisma, each member ensured they gave 200 percent on stage and their dedication and passion for the stage were witnessed by millions.

The encore with ‘Epilogue: Young Forever’ and ‘Spring Day’ turned an emotional chapter since it’s been two years since BTS and ARMYs have been apart. The last time fans sang the former track for BTS and this time, the band crooned for their fans. It was a teary moment for all. In the final few moments of the show, BTS delivered a heartfelt message for ARMY across the world. The members said, “The seven of us wanted to be a part of every bit of the setlist as a whole.” They added, “It does feel like the situation is improving. As ‘Spring Day’ suggests, please hold tight because we will be there to see you. We hope you enjoyed the show and we are truly grateful for the valuable time we spent with you today. We love you.” 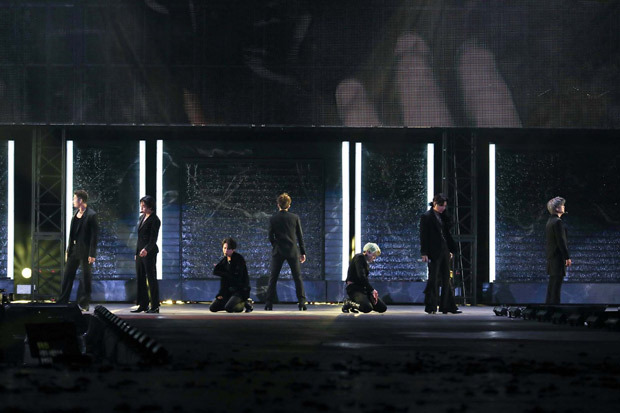 BTS admitted that this stage re-ignited the fire for performing again. “Honestly, I went through tough times when I was preparing for this concert, because I felt like I had no more driving forces,” leader RM addressed the fans watching the concert online. “I also felt like I was forgetting who I am… But thanks to today's show, I realized that I do not have to ruminate on my motivations or anything else if I can just see my fans.”

Jung Kook echoed similar sentiments citing, “Before performing on stage today, I was not even aware that my passion was gradually dying. But through today's show, I realized what was going on deep in my heart… I think I really have to meet you now. I miss you so much.” Jimin added, “The Olympic Stadium is really big, and without anyone here, it feels half like doing a rehearsal. It’s becoming more difficult to think of what to say now that I’ve said so much without you guys here. But I feel we’re gonna meet soon, so let’s talk more then.”

“I looked up our Final Concert, and it just felt like a dream --this whole place packed with no one wearing masks. Although it wasn’t easy to fill all the stages together, I grasped we’ll be able to reunite with you guys here at the Olympic Stadium next time,” Suga said in his ending statement. V said, “I actually felt sad (today). The injury came all of a sudden. I practiced anticipating how happy I’d be during the concert, but shamefully, I had to sit out for the actual concert. I’ll take proper care of my condition and show you guys what I couldn’t tonight."

"It was a huge challenge for us to do so," j-hope said (translations by Korea Herald). "We poured a lot of effort into this job. We feel that the (virus) situation is improving. So we will soon be there to meet you. Please wait for the day when we see each other."

"I think I am becoming physically weaker these days, as we cannot have a globe-trotting tour," Jin said. "So my voice cracked during one of the performances today. Before I get older and my body condition gets worse, I want to perform as much as possible. Following our upcoming Los Angeles concert next month, we will have more chances to see you."

There were moments of crop tops, almost shirtless scenes then there were goofy moments between the members – all in all, they came, they enthralled and they conquered the hearts of millions once again. At the end of the day, BTS added grandeur, their whole heart to this stadium concert. Whether it was dancing on ‘Black Swan’ to the tunes of ‘Fake Love’ or the dance break moment that connected their chart-toppers ‘Dynamite’ and ‘Butter’, the moving sets, or their ending comments, these moments felt like we were witnessing it all at the stadium. BTS set the bar so high for themselves with each show, only they can outdo themselves. BTS’ Permission to Dance on Stage showed how extensive and eclectic their discography is and how they seamlessly connect together during such concerts. They put up a magnum opus show with full enthusiasm, unwavering passion, and love that will be remembered for many years to come. 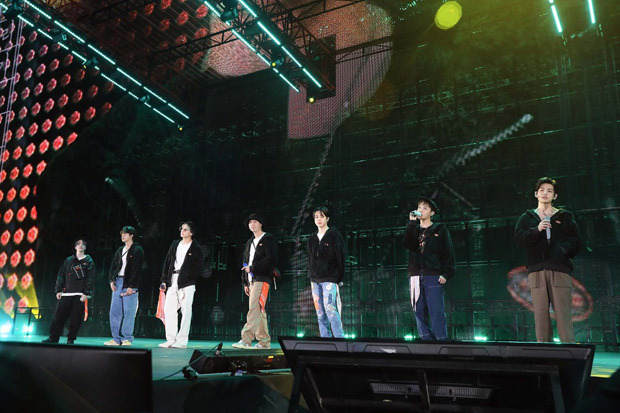 A 165-foot-wide LED screen and cutting-edge technologies were incorporated into the show for a more intimate live interaction with the audience watching from home. The LED screen—the largest ever for a BTS concert—served to reflect the massive concert stage, while Multi-view technology-enabled spectators to access six 4K/HD quality camera angles to the show. Adding on to the enchantment was ‘Visual Effect View (VEV)’, a technology that directly projects the meticulous visual effects and graphic visualization of lyrics displayed on the LED screen on-site to the screens of the viewers. The newly introduced innovation brought the virtual experience another step closer to the audience.

Last month, BTS announced additional show dates for 2021 in North America with four special nights at LA’s SoFi Stadium on November 27, November 28, December 1, and December 2. In addition to a live stream of the concert scheduled for December 2, “BTS PERMISSION TO DANCE ON STAGE - LA” will also be available for live viewing at YouTube Theater in LA through an offline event titled “LIVE PLAY in LA”.