BTS FESTA 2020 has officially commenced. The septet, every year, celebrates their debut anniversary with their fans with "FESTA" which is a festival way of celebrating with unreleased content, music, song covers, dance videos, photos among others. Starting from June 1, BTS has begun the two-week-long Festa with the summer version of their song 'Airplane Pt. 2'. 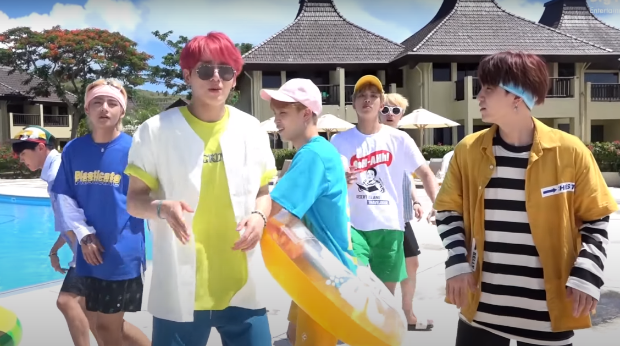 The song was recorded by the South Korean group for their 2018 album, 'Love Yourself: Tear'. The version was filmed during their Saipan trip when they filmed their summer package. Dancing by the pool, the members - RM, Jin, Suga, J-Hope, Jimin, V, and Jungkook - let loose as they enjoy the perfect weather while dancing along with each other. Their hair colours from that era were so bright and vibrant. We love them seeing vibing and chilling!

On May 28, the timeline was released and every content that will be shared leading up to the debut anniversary date, that is June 13, 2020.

Big Hit Entertainment has already announced “BANG BANG CON -The Live,” a virtual concert that will take place on June 14. It will mark their seven-year anniversary as a group.

On the work front, BTS is currently working on their next album after the release of their fourth LP 'Map Of The Soul: 7' in February, this year. Suga recently released his second mixtape 'D-2' after 2016's 'AGUST D'. The group is set to release their Japanese album in July and the jacket photos were released on May 28.