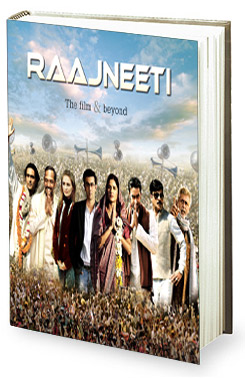 Albeit it comes at least a year too late, 'Raajneeti - The film & Beyond' easily qualifies as a collectors' item. In fact it won't be wrong to say that is one of the best reads to have hit the stands this year, what with impeccable content, brilliant layout, interesting collage and above all, mighty relevance that actually makes a good enough attempt to place Prakash Jha's Raajneeti in the annals of history as a classic no less.

It is this very endeavour, which is to register the film as a classic, of Prakash Jha and his single person team, Pooja Varma (who has compiled and edited this 250 page strong book) which makes 'Raajneeti - The film & Beyond' a book that is difficult to be put down once you have started turning over the pages.

It isn't easy to market a tale of a film that was released a couple of years ago and though it was received quite well both commercially and critically, still it wasn't hailed as something that would enjoy a cult status over the years. However Jha definitely believes that it is possible and through this book, he tries to gain further respectability for his movie which stays on to be one of the best political dramas to have been made in Bollywood.

To compliment this belief, the entire team comes together in ensuring that the film is as entertaining as it gets, what with high definition visuals complimenting some rich content as well that was possibly left unexplored during the promotion of the film. It was a difficult task though, more so since the 'making of the film' was covered quite extensively in the film's DVD as well. Still, one can see the effort that has been put in to extract further information comprising of ample anecdotes as well as the thought process that went into conceptualizing, writing, filming and then releasing the film.

This means that there is ample space dedicated to what went into direction, script writing, cinematography, editing, art direction, costume, location, action, music and production of the film. Of course those who haven't read the book may have apprehensions about all of this turning out to be sheer academic and only interesting for hardcore movie buffs. However this is where Jha and Pooja deserve brownie points because they make it all entertaining with quite a few real life incidents thrown in at regular intervals that never once make the book as a boring read.

However what impresses most, and something that was the case in the 'making' segment in the DVD as well, is the entire detailing of crowd management. One can't help but be awed by the manner in which the production team went about managing crowds of over 10000 who were not just assembled out of nowhere but were actually trained to perform their parts! Amazing, no less!

Moreover, what adds further value to the book is detailed characterisation of each and every actor who had a role to play in the film. Jha talks in details about what went behind the scenes in writing these characters, what was their background (which perhaps never came on celluloid but had a sub conscious value for sure) and how the actors were prepared to get into the skin. In the past, quite a few times one has seen a director or an actor sharing copious notes about how he/she had to be convinced to play a part. However this is the real stuff that Jha is talking about, what with every character being covered, whether big or small.

What makes it further special is Jha and his co-writer Anjum Rajabali bringing Mahabhrata reference to each and every character as well as some of the most important sequences and twists in the tale. Again, though one had heard about this as well as Godfather during the pre-release campaign of the film, what one gets to read in the book is something special and exclusive.

The grand finale though comes in the second half of the book where the script of Raajneeti is presented to the reader. Appearing in Hindi as well as its English translation, it makes for a captivating read.

All in all, both 'the film & beyond' which is presented in the book is a good enough reason to entice you enough into checking out the drama all over again on DVD at the least. Now that's indeed a good win for the book as it does its job well in bringing back Raajneeti into the scheme of things again, and that too rather successfully.