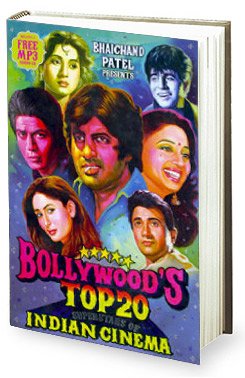 Now this is one book that leaves you with a sense of emptiness despite the fact that is loaded enough with as many as 20 write-ups on some of the most popular superstars in Bollywood. Even though it is quite word heavy, what with as many as 250 pages being dedicated to these superstars, the overall read is more literary than entertaining. This, when one is willing to ignore the fact that some of the most notable superstars have been missed from the 20 that Bhaichand Patel has compiled while entrusting other authors to pen down their thoughts for the respective actors.

There is no reason to complain though for the ones who have been selected and those who have been missed in the Top-20. After all, it is a compiler's individual prerogative and there is no point expecting your list to match with his. However, what one does complain about is the uneven narrative that the entire book takes with many chapters being plain boring that leads to severe dissatisfaction.

Of course the authors may argue that in ~10 pages that they were allotted to them for a particular superstar, there was limitation imposed on what to detail and what to omit. Still, as a reader, you do expect good meat in that limited space as well. The one who does best in this endeavour is Avijit Ghosh who comes up with a brilliant account of Rajesh Khanna in the shortest possible span and space. Interestingly worded and effectively told, it is a good tribute to the man who was pretty much alive when the book had hit the stands.

On the other hand the write up on the most popular superstar of all times, Amitabh Bachchan, hardly matches the standards set by Avijit. It seems like just a quick compilation and one has all the right reasons to sense the emptiness because several books have already been written on the legend. In a way Siddharth Bhatia too was handicapped due to this very factor but then when the situation is tough, it is all the more reason for an author to turn imaginative.

This is something that Shefalee Vasudev tries for Madhuri Dixit, though to severely amusing results. She just goes on and on in her heroine worship for Madhuri as Mohini (of Tezaab fame) and the entire write up just revolves around this very single factor with hardly anything interesting for the audience to revel on.

The earlier generation of Bollywood (when the industry wasn't named so) is covered as well with the likes of K.L. Saigal, Devika Rani, Ashok Kumar, Nargis, Suraiya, Dilip Kumar, Raj Kapoor, Dev Anand, Madhubala, Meena Kumari, Shammi Kapoor and Waheeda Rehman being covered. Well, this again turns out to be a mixed bag as most of the tales of the ones who were seen in the early days of cinema are mainly hear-say than being supported by documented evidence. Also, many amongst them have already seen books being dedicated for them and when most of them couldn't satiate a reader's hunger in the past, it is all the more tough to imagine a 10 page write up to do the job.

There are a few interesting lesser known factors thrown in thought that still manage to keep the interest alive. For example, not many would be aware of the fact that Nargis was charged with once shoplifting at a Marks & Spencer store in London. Or before Kajol (yes, she also finds a place as one of the Top-20 superstars!) arrived on the scene with Bekhudi, she was actually being directed by her mother Tanuja in a film, which was eventually shelved.

Many such interesting tales in the lives of Hema Malini, Aamir Khan or Kareena Kapoor could have added further weight (no pun intended) to the book but sadly, it doesn't quite happen. At best, it turns out to be a haphazard read that only takes a sudden twist at certain instances, case in point being Namrata Joshi's write up on Shahrukh where she starts off well but as an afterthought suddenly positions his Bollywood status as someone who is 'losing his stardom'.

Well, doesn't that by itself make one further apprehensive about the real value add that the book brings?