If you are a student reading this, you must be familiar with a report card. If you are a working professional reading this, you must have experienced performance appraisals. Well, this book by author Bharathi S Pradhan, Priyanka Chopra - The Dark Horse, is something like that. It basically picks up the work of Priyanka Chopra ever since she was crowned the Miss World, and acts as a performance review of sorts. It gives a glowing account of all the accomplishments that the actress has enjoyed over the years and shares testimonials from the industry bigwigs. 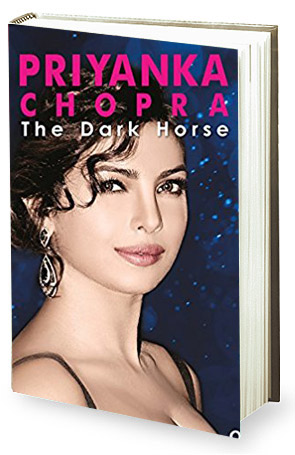 Now nothing wrong with that actually; after all, the actress deserves it. However what one is amazed to find out is that this performance review goes for as good as 200 pages! When you read a book like this where all you get to see is one glowing comment after another page after page, it becomes a little too much to digest. However that’s the core of the book actually which doesn’t offer much beyond how Priyanka has been a self-made woman while being an outsider with no industry backing whatsoever.

Well even that is understandable because all said and done, it is a fact. The girl from Bareilly has reached the Hollywood film and TV industry today and doing quite well for herself. Moreover, she has an entire acting career lying ahead of her where she has many more accomplishments to achieve. However, when there is an opportunity like this that comes up where a book around her reaches the stands, one would have expected a lot more about the lady than what you actually get to see.

So what you actually read is chapter after chapter where biggies like Subhash Ghai, Sanjay Leela Bhansali, Abbas-Mustan, Anil Sharma, Madhur Bhandarkar and more giving detailed account of how ‘iss ladki mein hamesha kuch baat thi’. Chalo, had that been in controlled measure then even that would have been okay. However that doesn’t happen.

As a matter of fact it all comes across as per-release interviews where all actors talk good about their co-stars & directors and vice versa. That is the reason why when it turns out to be a never ending story about hailing a person to the sky; one begins to lose interest as knowing much more about Priyanka as a person would have made for a balanced read at least.

This is the reason why one finds Suneel Darshan’s derailing about Priyanka Chopra to be the most insightful since he takes a balanced approach instead of getting into the star worship, which most others do. As the first filmmaker who gave her a break as a leading lady in Andaaz, he makes some interesting observations that are worth a read.

Wish there was more like that in the book which does touch upon other aspects of Priyanka’s life but only briefly.