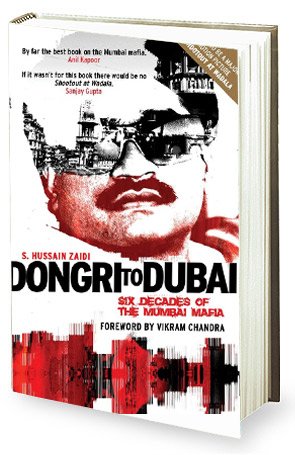 Fantabulous. Epical. Spellbinding. Intriguing. Stunning. Thrilling and above all, entertaining - This is how 'Dongri To Dubai' plays which is an excellent read, hence justifying the faith S. Hussain Zaidi wanted his readers to have in them as they went through the 'Six decades of the Mumbai mafia'. Though the book is as much about Mumbai as it is about Bombay when crime had started taking an organized preposition, it is the way in which Zaidi narrates the tale in a seamless manner which makes the book a definite read.

Yes, the book has Dawood Ibrahim's picture on the cover. In fact it also starts with one of the interviews of him taken by the author. However, 'Dongri to Dubai' is not just about Dawood and his journey from the lowly Mumbai settlement to the posh city in the Gulf; it is much more than that and over and above a tale that would otherwise have been restricted to just a man who rose up the ranks and formed his own organization.

To narrate this saga chronically, Zaidi the tale as if he was pretty much in the middle of it all instead of being an observer who was watching it all from a distance while being safely placed on a fence. Even though the journey of the underworld started decades ago, Zaidi narrates the escapades of the gangsters as an insider, hence pretty much conveying loud and clear that he had complete inside information on what really transpired back then, or is transpiring till the current date.

This means that 'Dongri to Dubai', while smartly integrating Dawood's story as a central affair, has everyone from Haji Mastan, Arun Gawli, Karim Lala and Varadarajan Mudaliar to Anees Ibrahim, Chota Shakeel, Chota Rajan and of course Manya Surve (on whose life Sanjay Gupta's Shootout At Wadala is being based) finding much more than just an appearance in the book.

Not just that as lesser known names like Amirzada, Alamzeb, Babu Reshim, Rama Naik, Jenabai Daruwali and Pathans find good prominence as well, hence making a statement loud and clear that in the process of telling a six decade long story, Zaidi wanted to cover all aspects of the underworld.

All of this leads to an extensive saga like affair which makes 'Dongri To Dubai' an exhaustive 350 odd page book that turns out to be an excellent, well spread out, detailed, engaging and exciting read throwing surprises at various junctures. Of course at the end of it all this is about crime which means killings, extortions, smuggling and other illegal practices feature all around. However crime tales have time and again intrigued and when it comes to some real life names that have made headlines, right from the 70s till date, it is difficult to ignore the relevance of 'Dongri To Dubai'.

To make sure that a viewer never loses interest in the proceedings, Zaidi brings his expert writing skills in motion as he tells it all as a story which is happening right in front of you instead of making it appear as a docudrama in the offering. Also, he even makes a good attempt at narrating the other side of the gangsters as well, which means other than guns blazing from all corners and corpses falling all around, he takes a journey into the mindset of law breakers as well.

It is this endeavour of Zaidi that prevents 'Dongri To Dubai' from turning out to be a mere action packed stuff and instead explores the formation and breaking of gangs, love stories going sour, friendship making way for enmity, misunderstandings leading to all around mayhem, sibling rivalry, quest for empowerment, desire for power and much more. This pretty much turns out to be the strength of this epical tale which has been rightly termed as '....the best book on the Mumbai mafia' by Anil Kapoor.

The book also scores in the fact that (as far as legally permitted) Zaidi doesn't hold back on calling a spade a spade and hence touches upon 'sensitive' topics like Babri demolition, Mumbai riots, post 26/11 mindset of people on both sides of law, Sanjay Dutt episode, Gulshan Kumar murder, Mandakini's brush with Dawood, Monica Bedi's tryst with Abu Salem as well as many other celebrities who have time and again had a brush with law and those who have a knack of taking it all heads on.

However the most interesting episode of them all is the one where Dawood almost came close to be being taken to task by the Indian government before some bureaucratic play foiled the plan. Read the book to find more!

As John Abraham has stated on the back cover of the book, 'Hussain Zaidi is a master storyteller'. Well, he is absolutely right here.

This one cannot be missed.