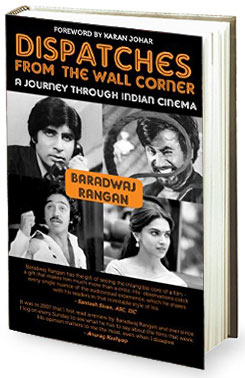 First things first, I have to admit that over the years, I have enjoyed reading Baradwaj Rangan's 'Dispatches from the Wall Corner'. As a movie critic, he has been truly different from most of his ilk, and whether it is his movie reviews or columns related to cinema, they have more often than not made for a fluid read. Hence, when compilation of his work over the years appeared in the form of 'Dispatches from the Wall Corner', I was truly excited. I have been told that the book has been available for a while. Unfortunately, I couldn't quite locate it on the shelves for a long time but now that I have managed to do so, I can pretty much say that I am delighted.

Generally a book that basis its core on a headline like 'A Journey Through Indian Cinema' threatens to turn into a boring read. It either becomes a whitepaper of sorts or begins to narrate a chronicle from the silent era to the current times while throwing references to classics and commercial successes over the decades. Hence, there was a wee bit apprehension that did set in when I saw such a headline on the book's cover.

Thankfully though, Baradwaj does none of that in this voluminous 600 odd page affair. With the likes of Amitabh Bachchan, Rajinikanth, Kamal Haasan and Deepika Padukone on the cover page, he makes his intent clear that he is catering to legendary actors as well as the fresh blood, while navigating between Bollywood and South cinema.

He does manage that well and though at places it does appear to be a tad academic, overall the book does make for an engaging read.

To ensure that you are interested right through the book and fluctuate between one kind of write up to another, he divides the book in six sections - Actors, Hindi Cinema, Directors, Music, Tamil Cinema and Reviews. Of course, it was the last segment that pulled me to the book in the first place. However, the fact that he indulges in writing chapters of a different kind as well managed to bring in added variety.

What is notable is that amongst his chosen subjects, he doesn't necessarily take a conventional route. So while the aforementioned actors certainly feature in the first few pages itself, it is remarkable to see the likes of Nirupa Roy, Sarika, Joy Mukherjee and Feroz Khan have a chapter each dedicated as well. Ditto for the directors segment where he brings on Ram Gopal Varma, Prakash Mehra and Shankar too.

Meanwhile, his many chapters more often than not touch upon topical tales, which are entertaining, informative and incisive, something that ensures that you do move on to the next one quick enough. Of course, this also means that at places one does get fatigued since there is so much in the offering by Baradwaj. Hence, you can't really finish off this book in one go. It isn't as much about interest as it is about focus as too much of anything isn't always quite good.

Hence, mid-way through the chapters, I moved on to the reviews, which take up almost half the book. With movies being covered from the days of Swades to 2 States, there are as many as 65 odd films that see an opinion from Baradwaj. A few of these are also Tamil films which are informative to go through as well. Also, it is nice to see a different kind of perspective from the critic as he writes like someone who truly loves cinema, and isn't just putting together some words because it is either his job or he is waiting to rip apart his film.

Just as is the case with any creative person, you can't really agree or disagree with his work 100%. Same is the case with Baradwaj and his many views in the book as well. However, the fact that he aims at a fair play is what makes 'Dispatches from the Wall Corner' a good read.