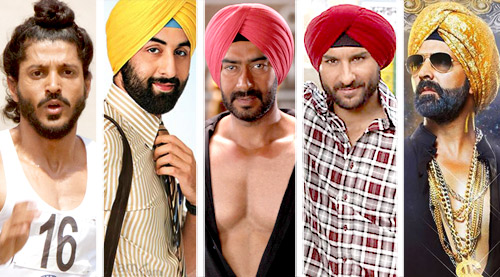 1. Farhan Akhtar In Bhaag Milka Bhaag: The best transformation by a non-Sikh into a Sikh character. This was

the best most physically proximate biographical character since Ben Kingsley in Gandhi.


2. Dharmendra in Jeevan Mrityu: Dharmendra has always been a Sardarji at heart. Affable and noble-hearted, he actually got to play

a turbaned Sikh in Satyen Bose's Jeevan Mrityu where he returns from the dead to hover protectively around the very young and vulnerable Raakhee.

3. Sunny Deol in Border: If Papa Dharama Paaji looked as cool as a crowned cucumber in a pugdi, beta Sunny can't be far behind.

before plunging into Shimit Amin's film about office politics. He was convincing in the turban. But he made his Sikh character too stiff and


5. Ajay Devgn in Son Of Sardaar: This not so convincing Sardarji act was all about winking blinking and fooling around. No

substance here, only a shallow laughter. Ajay didn't really play a Sardar. The Sardar played him.


6. Akshay Kumar in Singh Is Kinng: Laughter is not necessarily a cue for flippant acting. Akshay Kumar as Happy Singh made us soâ€¦

happy! It was a buoyant, confident performance. Watch it again, and you'll know what Akshay means by saying he feels like Sikh when dons the


7. Saif Ali Khan in Love Aaj Kal: If you have a Belgian model playing a Sikhni, this is what you get. Shame on Imtiaz Ali for not

the role with much integrity. If nothing else he deserves a pat on the back for playing a Sardar against the stereotypical image of the genial


9. Ajay Devgn in The Legend Of Bhagat Singh: Next to Farah Akhtar's Milkha Singh, this is the most convincing real-life Sikh

character ever played by non-Sikh actor in Bollywood. But the National award was more for the 'Mera Rang De Basanti Chola' sentiment than


10. Akshay Kumar in Singh Is Bliing: Delightful. Energetic. Warm, Goofyâ€¦Akshay is all of this and a lot more as the aimless

wastrel Raftaar Singh. His body language and comic timing and his incredible Bhangra moves make this the most interesting Sikh character ever