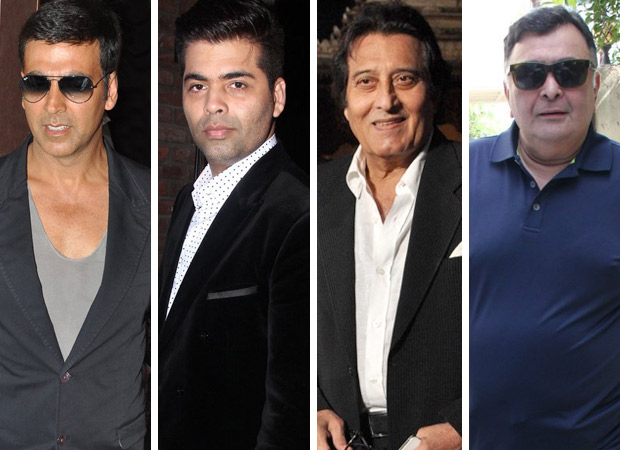 It's a very sad day for the Hindi film industry. Veteran Bollywood actor and politician Vinod Khanna, who was hospitalized due to severe dehydration, took his last breath on Thursday morning. The actor was admitted at Sir HN Reliance Foundation Hospital and breathed his last at 11.20 am on April 27 due to advanced bladder carcinoma.

It was only a few days ago when Vinod Khanna's photograph from the hospital had gone viral in which he did not like his former self. The hospital reps and his sons Rahul and Akshaye Khanna had confirmed that Vinod Khanna was doing better.

The film fraternity is deeply saddened by the sudden demise of Vinod Khanna. The celebrities took to their social media to offer condolences to his family and friends and reminisced about the days when they had an opportunity to meet and work with him,

Sad to learn about the passing away of #VinodKhanna Sir,one of the most charismatic actors...truly end of an era.Condolences to the family????????

#Vinodkhanna will always remain the coolest and most good looking actor to grace the Indian screens.The industry has lost a legend today.

Remembering the good times with you,Vinod. Thank you for being my friend. pic.twitter.com/hvZoYeQMEF

Will remember #VinodKhanna ji for his larger than life performances & his graciousness. There r very few people like him. Will miss u Sir.????

An icon passes on but his legend remains in r hearts & minds! RIP #VinodKhanna ji u will be missed,Heartfelt Condolences @R_Khanna & Akshay!

Sad to hear about the passing away of the most handsome charming & talented #VinodKhanna. You will always be remembered sir. RIP

#VinodKhanna ji had a magnetic charm & persona. Both on & off screen. He was kind, affectionate & helpful. Loved his panther like walk. ???????? pic.twitter.com/q01Hmqxbdp

my dad made me see a film called PATTHAR AUR PAYAL .. i came out becoming a fan of the villain. thank you Vinod Khanna for the films..

From 'Mere Apne' - the film I studied for Nagma, GOW. We will miss you and your easy charm sir #VinodKhanna ???????? https://t.co/pGtRs0iPqj

Will miss you Amar. RIP. pic.twitter.com/WC0zt71R4J

My prayers and heartfelt condolences to his loved ones and his family. Very sad day for all of us. May his soul rest in peace. Amen.

Rest in peace #VinodKhanna ji. You were Amar, you are Amar will always remain Amar for all of us in our hearts.

Rest in peace #VinodKhanna and thank u for the great memories.

His screen presence is unparalleled even today...his super star swag is what we grew up on....RIP #VinodKhanna ...thoughts and prayers....

Legends are forever. #VinodKhanna, your style and immense charisma has set an example, you will always live in our hearts.

Was blessed to share screen space with the legend. Will miss u sir. Rip#VinodKhannaji pic.twitter.com/DRFclKOxYK

Heartbroken to hear about the passing of Mr. Vinod Khanna. Deepest condolences to Akshaye, Rahul and the rest of the family.

He will live on forever in all of our hearts as a true hero ... #VinodKhanna

They don't make them like that anymore. RIP Vinod Sir. pic.twitter.com/u7JdCNXDgE

Sad to hear about #VinodKhanna sir ! May he rest in peace ????

Your charisma,magnanimity, and talent will live on forever #RIP #VinodKhanna ji ???? carefully carefree .. wish the world more of you ???? pic.twitter.com/SIpP5fagAK

A superstar, a true legend and eternally handsome #vinodkhanna #RIP you will always stay in our hearts.

My heartfelt condolences to the whole Khanna family... He will live on through his legacy & in our hearts... #VinodKhanna you will be missed pic.twitter.com/O9IqvJn0qL

Extremely saddened by the news of Vinod Khanna Sir's demise. Generations of people have been inspired by his work and goodness. RIP Vinodji

RIP Vinod Khanna-ji. The world has lost another talented soul. You will live on in our memories. Our sincerest condolences to his family.

RIP Vinod Khanna sir. You'll always be remembered as the handsomest superstar who made his own rules. Aap humesha 'Amar' rahenge.

A huge loss to the film industry. One of the nicest and most charming gentlemen ive had the pleasure of working with. #VinodKhanna sir, RIP.

A legend passes but a legacy lives on. RIP #VinodKhanna sir. Peace and prayers wherever you are. Heartfelt condolences to his family. ????????❤️

Vinod Khana, a brilliant actor & a handsome man, will be missed. Proud to say we were from the same school... RIP

I will never forget the warmest hugs, the gentlest smiles and our conversations...Your light will always shine on us... #RIPVinodKhanna

Even in brief greetings he never failed 2touch ur heart. Admired n looked up to him since I ws a kid. True legend. RIP Vinod khanna

My dear friend Vinod Khanna... will miss you, RIP. My heartfelt condolences to the family.

Bollywood Hungama sends out its heartfelt condolences to the veteran actor’s family and friends. May his soul rest in peace.

Hungama Play launches Season 2 of its…