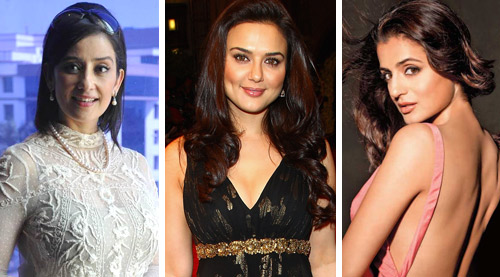 Manisha Koirala: "It is sad, but many really good actors don't evolve as the years go by. Aamir did. I've seen him grow as a human being and an actor. When I see him in his films I am filled with admiration for the quality of work that he does, and gets. I got some fabulous roles earlier but couldn't really get the kind of work that I wanted in recent years. Aamir Khan never does mediocre work just for the heck of it. Even when Aamir does an out-and-out entertainer like Dhoom 3, the product is so many notches above the usual fare. What I truly admire about Aamir is that he is a socially conscious human being. I've the deepest respect for his social consciousness. I think 'Satyamev Jayate' is one of the bravest attempts to expose the hollowness of our society. Full credit to Aamir for attempting that! I have done two memorable films with Aamir. Mansoor Khan's Akele Hum Akele Tum which fetched all of us a lot of acclaim. Surprisingly, I am asked about my other film with Aamir Mann to this day, even though it was not received well. Mann was a typical over-the-top Indra Kumar film. Aamir and I had to do a lot of over-acting. Usska bhi apna ek mazaa ttha. Akele Hum Akele Tum was a lot more subtle. I had to play this woman who abandons her husband and child to pursue a career. I was not very convinced about the part. I don't see why a home and a career should be an either-or choice for a woman. If I had to make that choice in real life I'd choose both. However it was a character I had to play. I remember during those days I was working 7 days a week doing 12 films. Aamir was completely focused on this film. He had a lot to say about the scenes. Initially I didn't enjoy his suggestions. Luckily, Mansoor is not a director who will allow his vision to be re-directed by anyone. So his will prevailed. As the shooting progressed I realized Aamir had extremely pertinent suggestions to make, and they were all for the benefit of the film. He doesn't think only about himself. He thinks about the film. None of the changes that he suggested was done off-hand or suddenly. They were all planned from earlier and after taking me into confidence. So I was okay with them eventually. What I learnt from Aamir was concentration and hard work. He gives all of himself to his films. It's not just his character, he cares about a film in totality. Working with him I learnt a lot about concentration and self-discipline. I realized preparation is most essential. Aamir is a perfectionist to the core. It may irk those who are not that sold on getting it right. But to those who enjoy striving for a flawless scheme of things, he is a dream co-star."


Preity Zinta: "Aamir has always been very focused on his work, dedicated, sweet, a bit mad and a lot of fun. We had a lot of fun working in Dil Chahta Hai. No one took oneself or for that matter the film very seriously. Of course, we slogged hard to get it right. But this was not an issue-based film or a period film. It was a youthful film. And we were all young, and raring to go. All of us had a ball working on it."


Ameesha Patel: "Everyone knows Aamir to be a perfectionist. But only those who have worked with him can vouch for his integrity. I am one of the lucky heroines who had the privilege of doing one of my most important films, Mangal Pandey with Aamir. I'd have worked earlier with him in Lagaanâ€¦Yes, I had auditioned for Lagaan and I had almost been finalized. It was at the audition for Lagaan that I met Aamir for the first time. I remember he was a superstar. I was a nobody. Yet he treated me so gently and affectionately. He put me at ease completely. Then I went away to New Zealand to shoot for Kaho Naâ€¦Pyar Hai where I got to know that the Lagaan director Ashutosh Gowariker had rejected me because according to him my eyes looked too intelligent and educated to play the village belle. Ironically, I was selected to play my character in Gadar for the same reasons that I was rejected in Lagaanâ€¦they wanted someone who looked intelligent and educated. Even more ironically Lagaan and Gadar opened on the same day. They both went on to make history. I was destined to make history of another kind with Aamir when we did Mangal Pandey: The Rising together. Let me tell you, the offer didn't come from the producer or director but straight from Aamir. I was in Hyderabad shooting for a Telugu film with Mahesh Babu when the call came from Aamir saying he wanted me to play the widow Jwala in Mangal Pandey. 'But hasn't Aishwarya Rai already been signed for the film?' I asked Aamir. He said she had. But he wanted to replace her with me. He wanted a certain vulnerability and innocence in the character. I accepted the part. It was one of my best career decisions although any other actress of my generation would have refused to play a widow so early in her career. I learnt so much just watching Aamir at work. Every actor was required to be on location irrespective of whether he or she was needed for shooting or not. We were shooting in Pataudi and every day Aamir would put on tanned makeup for his character. I asked him why he needed to use tan makeup from head to toe when all that was visible on screen was his face and hands. He said he had to feel everything authentically for the part. I've never experienced such dedication in my career. He was genuinely concerned about each crew member. When I was signed he asked me my fee. When I quoted a price he agreed to pay without consulting the producer. When the shooting was over my payment was not fully made. I didn't want to bring it upâ€¦who cares about money when you get to work with Aamir? But would you believe it! He called me up and asked if my dues had been cleared. When I told him they had not been cleared he made sure the money reached me. This is the level of Aamir's integrity. I used to call him Pinnochio on the sets. Pinnochio's nose would turn red if he lied. Aamir would turn red-faced if he had to tell a lie. Honesty comes naturally to him. If I had to do Mangal Pandey again I'd do it for Aamir. Is he really turning 50? To me he's eternally 22."