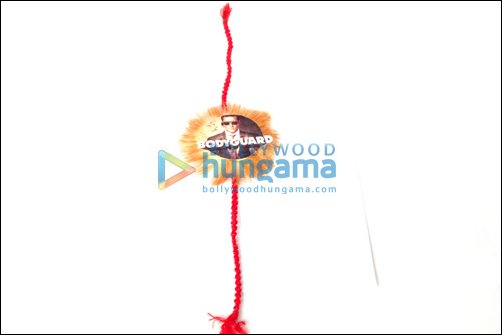 'Brothers are also bodyguards' expressed Salman Khan at the launch of the first look of Bodyguard. The Dabangg actor whose new avatar this Eid is, that of a Bodyguard, strongly believes that every person who loves and protects their loved ones is a true bodyguard.

It's obvious that young girls would like their real brothers to be protective of them, warding off dangers with an iron fist and a karate kick, just as Salman Khan does in the film's promos

The Bodyguard team is surprised and amazed to see how the market is flooded with the Bodyguard rakhis and the people are extremely pleased and are in high spirits with the newness it brings to the festival. Interestingly, these rakhis are not a marketing gimmick. In fact, producer Atul Agnihotri was amazed and surprised. "Is that so? Well, they are not part of the film's promotion, but I like the idea," he expressed.

This festive season with Eid and Ganpati, Salman and the entire Bodyguard team is happy to see such a trend emerging and wish to spread good wishes and warm respects to every person who protects their loved ones. It is amazing how Salman has such a huge mass appeal and a big fan following and that such innovative rakhis have emerged in the markets grabbing everyone's attention.

Salman Khan himself is a protective brother to sisters Alvira and Arpita and his cousins. "Every Rakhsha Bandhan, Salman, Arbaaz, Sohail and I, along with my wife Alvira, meet at Salim uncle's (father-in-law Salim Khan) house for lunch. It's an annual affair and an elaborate gala," informs Atul. "Salman is a magnanimous guy, so it's easy for his sisters to arm-twist him for gifts on this day. He doesn't dole out standard gifts, whatever he decides on always leaves them smiling."

The upcoming Eid release, in which Salman plays a bodyguard, opens in theaters on August 31. It will be the third Eid release of Salman after blockbusters like Wanted (2009) and Dabangg (2010).