Actor Bobby Deol is missing son, Aryaman, who is returning to college in the United States, in an Instagram picture. He posted a photo with his wife Tanya Deol, in which the three of them were dressed in colour-coordinated clothing. 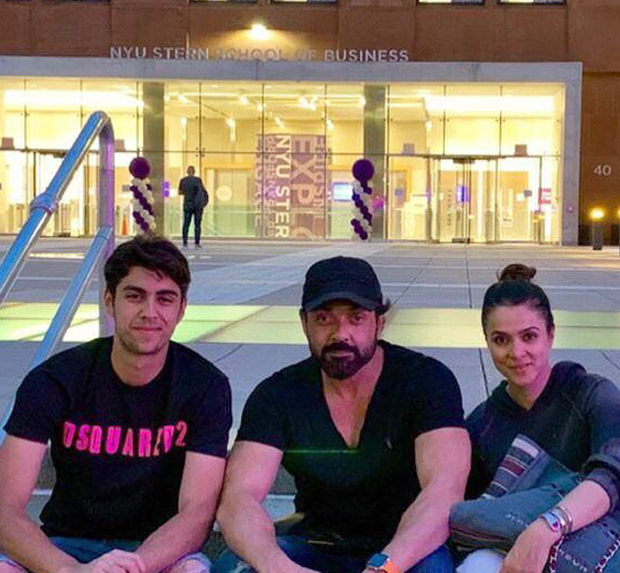 “Back to University … miss you already … love you my Aryaman. #loveyou #missyou #newyork,” the post was captioned. Actors Preity Zinta, Adhyayan Suman and Sachin Shroff, among others, dropped heart emojis on it. Wellness coach and author Deanne Panday commented, “Awwwww my most handsome Aryaman… Enjoy university life & stay safe my love.”

Aryaman, 20, is a business management student in the United States. Bobby reportedly stated that he is "leaning toward schooling," but that he may want to pursue acting as a vocation in the future.

Bobby appeared in films such as Gupt: The Hidden Truth, Soldier, Ajnabee, Humraaz, and Jhoom Barabar Jhoom after making his Bollywood debut with Barsaat in 1995. In 2018, he began the second half of his career with Race 3. He's since been in films including Housefull 4 and Class of 83.

Bobby will next be featured in the films Penthouse, Love Hostel, and Animal. For their home production Apne 2, he will also reconnect with his father Dharmendra and older brother Sunny Deol. Sunny's eldest son Karan Deol will play the youngest generation in the film, which will feature three generations of the Deol family.

Also Read: Ananya Panday turns up the heat in a sexy orange and white checkered bikini during her vacation in Maldives