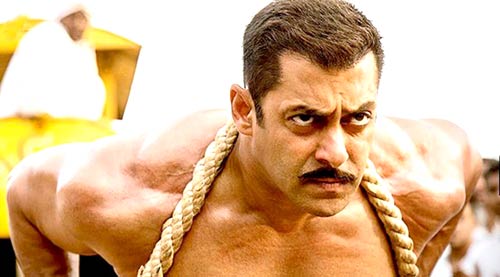 As the nation and its favourite trade pundits brace themselves for the release of the new Salman Khan starrer this week, the question being asked is, how big is big when it comes to Salman Khan. Sultan is expected to make Rs. 300 crores in the first week.

Explains trade analyst Taran Adarsh, "Salman Khan + Yash Raj + Eid release... it can't get bigger than that. Over the years, Salman's box office status has multiplied manifold and every film of his generates tremendous curiosity. The volume of business coupled with the massive fan following he enjoys, raises the bar every time a new Salman film is about to release."

And yet Taran sounds a note of caution for those who are already predicting Sultan to be the biggest blockbuster of Bollywood's Bajrangi Bhajiaan's career. "It's a bit too early to predict if Sultan will surpass the business of his previous films. But the fact is that the advance booking has been fantastic and it being a 5-day weekend, the film is expected to shatter records."

Trade pundit Komal Nahta is more certain of Sultan's spectacular success. "There are all chances of it being Salman's biggest ever. At least one of his biggest for sure. Music, craze, dialogues, trailers.... Everything is highly talked about. Box-office history is waiting to be rewritten."

Adds trade analyst Atul Mohan. "The Sultan producers Yash Raj Films are targeting at widest release forSultan. Not only in India but overseas also. Audience is hungry for a massy film, which hasn't come from long time. As we can see from the advance booking that opened on Sunday the ticket prices have been hiked and shows are getting full within few hours. With the long weekend ahead, the film should easily cross more than half of Salman's previous best collections within five days. No major release for three weeks after its release will make sure it enters the prestigious club of Rs. 300 crores. The content of Bajrangi Bhaijaan ensured that it got good run at the box-office and if Sultan's content is lapped up by the audience, then new records will be created."

Senior journalist and critic Bharathi S. Pradhan says, "It will be huge. But beating his own blockbusters may be a problem. It would depend on how good the film itself is. If it's disappointing like Prem Ratan Dhan Payo, it won't go beyond the expected initial draw."