Ranveer Singh will host director Rohit Shetty and actor Katrina Kaif on his television show The Big Picture this weekend for the promotion of their upcoming film Sooryavanshi. In one of the promos shared by the makers, Rohit starts a dance-off between Ranveer and Katrina. The two stars dance to “Tattad Tattad” and “Chikni Chameli” as Rohit wonders who is the better dancer of the two. 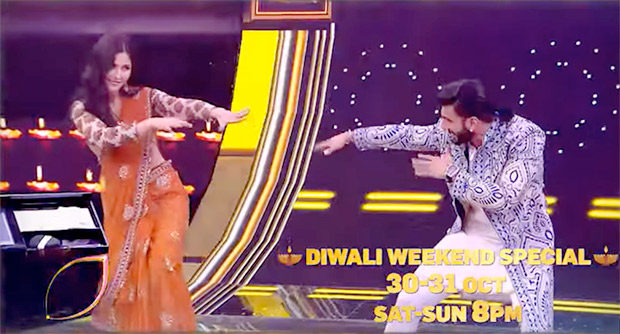 In another promo released by the channel, Rohit Shetty is struggling to answer a question correctly when he asks Ranveer Singh to help him out. When Ranveer refuses to help, Rohit jokingly suggests that he could cut his part from Sooryavanshi, making the audience laugh.

Ranveer and Rohit have previously worked together on Simmba. The two are also collaborating on Cirkus. In Sooryavanshi, Ranveer appears in a cameo role as the film is a part of Shetty’s cop universe with Singham and Simmba.

Sooryavanshi, starring Akshay Kumar in the lead role, is set to release in theatres on November 5.