After Airlift and Satyameva Jayate, Bhushan Kumar and Nikkhil Advani are coming together for a gripping film Batla House which is being helmed by Nikkhil Advani himself. John Abraham is the leading man who is essaying the role of Sanjeev Kumar Yadav, the cop who spearheaded the Batla House encounter. Bollywood Hungama was the first to inform that TV actress and the newbie in films, Mrunal Thakur will be seen in a leading role in the film opposite John Abraham. 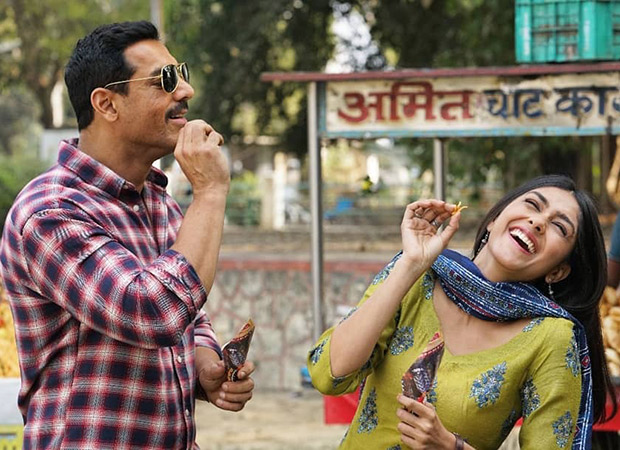 On the occasion of his 46th birthday on December 17, Mrunal Thakur shared the first glimpse of her character with John. The happy couple of Batla House seems to be having a good time in this new photo. John is dressed in a plaid shirt and sunglasses whereas Mrunal is in a green dress as they enjoy ice cream together. Talking about getting to work with John Abraham in Batla House, Mrunal wrote, "I was so overwhelmed when I first heard the narration of Batla House, that very moment I knew that I want to be a part of this film. I didn't know how it was going to be like! I was nervous as it was a new project, new beginning, new character with a new co -star. I am always so blessed to have the best. This one's for you John! thank you for always motivating me, appreciating my work and playing pranks on me which fails hehehe. And I'm absolutely enjoying shooting with you! So effortless.... Can't wait for the world to see Sanjay Nandita. Happy belated birthday !!!"

For the uninitiated, Batla House is based on the encounter that happened in Delhi between the police officials and the terrorist group, Indian Mujahideen. In fact, there have been theories floating about the operation. Some police officials reportedly too were blamed for it claiming that it was an intentional encounter. Keeping the sensitivity of the matter in mind, Nikkhil Advani had earlier revealed that Batla House will retain all perspectives in mind. He mentioned that the encounter case will be seen from three different perspectives, one of the police, one of those present at the location and the real picture.

DCP Sanjeev Kumar Yadav, who's part will be essayed by John Abraham, has eight President Gallantry Awards and he has won one of them for executing this operation.