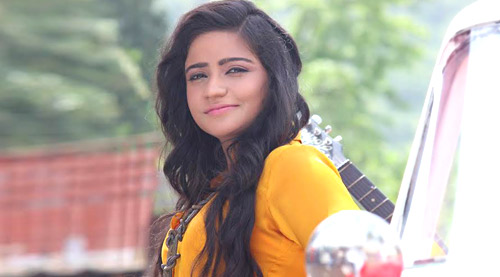 For Swati Sharrma, this was nothing less than a God sent opportunity. Even as she is still collecting all the accolades coming her way months after her 'Banno' [Tanu Weds Manu Returns] turned into a chartbuster, there are as many as six songs that she has bagged for Direct Ishq, a romantic musical. With each of these songs establishing her versatility, it couldn't have come at a better time, considering the fact that current award season has already seen quite a few nominations for Swati, including a win that has already come her way, courtesy 'Banno'.

"And to think of it, I am so very surprised just with the nominations," smiles Swati, a young girl who has come all the way from Bihar to Mumbai and is in the process of making it big, "There is just one line of mine in 'Banno' and that by itself has become so big. Honestly though, to begin with I worried that in a movie as huge as Tanu Weds Manu Returns, where Kangana Ranaut was clearly leading the show, will that one line in 'Banno' actually stand out. And here I am, not just getting nominated along with big singers like Shreya Ghoshal and Sunidhi Chauhan but even getting acknowledged for my work."

She is understandably elated after willing a Platinum Disc award from a leading radio station, more so since the award comes from the music fraternity, basis performance of the song on the charts.

"Last one year has changed everything for me," she gushes, "In January 2015, I was sitting at home, watching these award functions on TV and seeing these great singers walk the red carpet. Of course I did crave for awards of my own too. I know for sure that 'Banno' is just a start and I am certainly going to sing a lot more songs."

Direct Ishq has turned out to be one such film, what with as many as six songs to her name.

"Yes, it is so very amazing," Swati says, "There are six songs of mine and they all are of different genres, be it romantic, pathos filled, soft rock or pure rock. It is a big opportunity for me to be doing so many different songs. My composers (Tanishq, Vivek Kar, Raeth Band) wanted to hear my songs before agreeing to rope me in for all numbers. Guess I managed to impress them all."

While her voice has already been heard in an item number 'Direct Ishq', love song 'Nimboo Sa Ishq' and angst filled 'Mera Kissa', one looks forward to what '
Duwa Mein', 'Ganga Maiya' and 'Toote Tare' have to offer, considering the fact that they all belong to different mood, stage and setting.

"I love each and every genre; I am comfortable with them all. However, if you ask for my personal choice, it is soft rock and pathos filled numbers that I love most," she concludes with a smile.