K-pop group ATEEZ is back and how! Starting their new era with 'ZERO: FEVER Part.1' , the title track 'Inception' music video was released on July 29. The group, that consists of eight members: Hongjoong, Seonghwa, Yunho, Yeosang, San, Mingi, Wooyoung, and Jongho, absolutely takes you through a rollercoaster of emotions in the gripping music video. 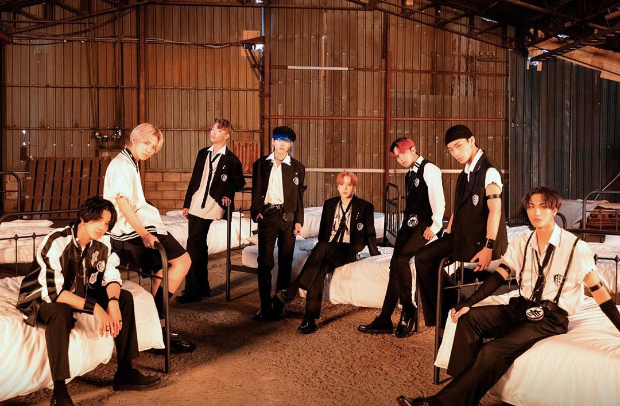 The eight members seem to be at a place locked up where some of them are in bed and it feels they are in a fever dream. The lyrics reflect the sentiment that they trying to escape their past and trying to meet each other after being separated for a long time. "In a moment's eye contact / The moment all senses stop / The little tremors that spread inside me / The first feeling I've felt like I wasn't locked up /  Even though I've never seen it in a dream / I feel like I'm dreaming / It's a rather clear feeling to conclude that it's a dream / I'll only be expecting the day I'll see you again."

As suspected from the teasers and the diary film, since the 'Treasure' album series had already hinted that dimensions and time travel, the new era feels like a prequel. In the music video, you see them surrounded by water and fire. It is known that fire and water represent loss and destruction. There's also a part where Seonghwa is standing near a TV screen which is playing 'Say My Name' music video which puts things into perspective that where they were also fighting their dark selves in 'Hala Hala / Say My Name'. There are a lot of parallels with past music videos including 'Wonderland' as well. It feels like the world was collapsing in their fever dream as they tried to get back to each other. "As if I have dreamed in a dream / I am lost looking for you / You are the dream I live in, the dream I can never awake from / Every day & night I’m gon’ chase you."

The music video is upbeat with visually appealing moments, crisp choreography especially the dance break in the water, and more importantly, the vocal and rap verse truly blend together making it like an "anthem". It leaves you mesmerized but you want to know more where the storyline will head.

All in all, the seven-track mini-album is available and if you haven't had a chance to stan ATEEZ, now would be the time.