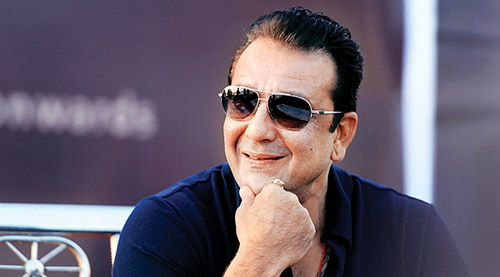 Sanjay Dutt will be released on Thursday. Yaaay! That's what one of his heroines Raveena Tandon said when I mentioned this joyful tiding.

Apparently Dutt won't be doing any films for a few months. "Baba just wants to chill with his family for a while. He missed out on some of his twin kids' growing-up years. He wants to make up for lost time by spending as much time as possible with his kids, wife and his two sisters. They are his world now," a faithful friend says.

Wipe that tear. The friend forgets Dutt's eldest daughter Trishala from his first marriage to the ill-fated Dev Anand discovery Richa Sharma. Trishala who is now 25 and lives in the US is very active on social media. She has hardly seen her father all her life.

Once when I interviewed Sanjay Dutt he had confessed he "dreams" of seeing the entire family together. "Maanyata and Trishala could be friends. I wish she could come and live with us," Dutt had said.

A day later he called to ask me not write about Trishala. I didn't ask him why. If you know Sanjay Dutt at all you would know he changes his mind within no time, sometimes within minutes.

The point is, he will now portray himself as the family man, deprived of his growing children's company by the cruel kanoon of the land that doesn't show leniency towards parents or children. While fully supporting the image of the cleaned-out devoted family man which Dutt will project from this weekend, I wonder if his career stands to gain the momentum he hopes for.

A very close filmmaker-friend says, "The sympathy card would be strong. But how many filmmakers would actually want to sign him? His buddy Raju Hirani says he is making a bio-pic with Sanjay Dutt. But can Raju make another Munnabhai film with Baba?"

There is a problem here. Munnabhai is all about loving our neigbours and country. With levels of intolerance rising to seditious heights would a section of the public be willing to accept a Munnabhai who has gone in for anti-national activities?

Rebuilding his career won't be easy at all for Sanjay Dutt. His last 4 releases as a leading man before his incarceration-Department, Zilla Ghaziabad, Policegiri and Ungli-were miserable failures. He was a hit as a villain in Agneepath and a sidekick in PK.

At best Sanjay Dutt can hope to build a career as a supporting actor.