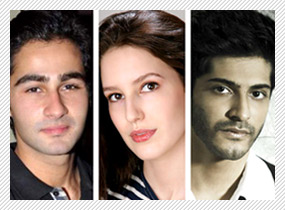 Bollywood is perhaps the only film industry in the world to have family dynasties ruling the roost. This has been the trend for decades and if the lineup of siblings all set to knock the doors of B-Town is any indication, there isn't any change in sight.

Armaan Jain - Cousin brother of Kareena Kapoor
This is one debut that would be much awaited, considering an array of names involved. Armaan Jain has a massive lineage to live up to and those who have entrusted him to deliver goods are none less than Saif Ali Khan, who is producing Lekar Hum Deewana Dil along with Sunil Lulla and Dinesh Vijan, and Imtiaz Ali, whose brother Arif Ali is directing it. Promotion of this film has started on just the right note.

Isabelle Kaif - Sister of Katrina Kaif
This could well turn out to be one of the most high profile launches of 2014. Isabelle Kaif has completed the shoot for Vinay Virmani starrer Dr. Cabbie which has backing by none less than Salman Khan. An international film with a strong Indian connect to it, one waits to see how does it present Isabelle on the screen, considering Katrina Kaif is a superstar already.

Akshara Haasan - Sister of Shruti Haasan
It was just a matter of time before acting bug bit Akshara Haasan too. This has happened now, what with the PYT all set to make her debut with director R. Balki. Interestingly titled Shamitabh, the film has Amitabh Bachchan in the lead along with Dhanush who made a terrific debut last year with Raanjhanaa.

Aparshakti Khurranna - Brother of Ayushmann Khurranna
Though the turn of events hasn't really been high profile, the fact remains that Ayushmann Khurranna's brother Aparshakti Khurranna is all set to make his debut pretty soon. In fact he has already shot for the Manoj Bajpayee starrer Saat Uchakkey in Delhi. The film is currently in post production and one waits to see if Aparshakti has treaded the same path as Ayushmann or brought in something different on screen.

Luv Sinha - Brother of Sonakshi Sinha
This is going to be one re-launch that should make for an interesting watch. After the release and debacle of Sadiyaan, it had seemed that curtains were down for Luv Sinha. With not many brownie points gained on the acting front either, Luv was in hibernation for quite some time. However there is a shot in the arm that is come in now, what with producer Ekta Kapoor putting her money on the youngster.

Harshvardhan - Brother of Sonam Kapoor
This one should be a biggie. Just like Sonam Kapoor who got the biggest possible launch with Sanjay Leela Bhansali's Saawariya many moons back, brother Harshvardhan too is all set for a high profile debut in a film which would be directed by none other than Rakeysh Omprakash Mehra. Titled Mirza Sahiban, the film is said to be a love tragedy based on the legendary love story, albeit with a contemporary touch.

Sakshi Khanna - Brother of Akshaye and Rahul Khanna
Though Akshaye Khanna's career as an actor has gone nowhere and Rahul Khanna never seemed inclined to pick one in Bollywood, third Khanna in the family, Sakshi, is all set to kick-start his B-Town foray. Unconfirmed reports indicate that his debut would be with a Milan Luthria film though there is still an air of secrecy around whether it would be just produced or also directed by the man behind The Dirty Picture.

Johny Baweja - Cousin brother of Harman Baweja
While Harman Baweja recently had a release in Dishkiyaaoon, his cousin brother Johny Baweja has already gone ahead and wrapped up his debut Bollywood flick. A thriller, Sun Ladki is directed by Ishaan Trivedi who has earlier made 7 1/2 Phere and Radio.

Barbie Handa - Cousin sister of Priyanka Chopra
Barbie has been in news for quite some time though one still waits to see her on the big screen. The wait should be over this year though as she is all set to make her Bollywood debut with Anubhav Sinha production Zid that has been directed by Vivek Agnihotri. She would have to match up to huge expectations though, considering Priyanka made a huge mark with her debut film as a leading lady, Andaaz.