The South Korean group BTS has been Los Angeles for over a week now. This past Sunday, the seven members made their debut on stage at the 2020 Grammy Awards alongside Lil Nas X, Nas, Billy Ray Cyrus, Mason Ramsey, and Diplo. The members - RM, Jin, Suga, J-Hope, Jimin, V and Jungkook - performed 'Seoul Town Road', the remix version of Lil Nas X's ' Old Town Road'. Ahead of the Grammys 2020, they bumped into pop sensation Ariana Grande who also performed at the grand stage. 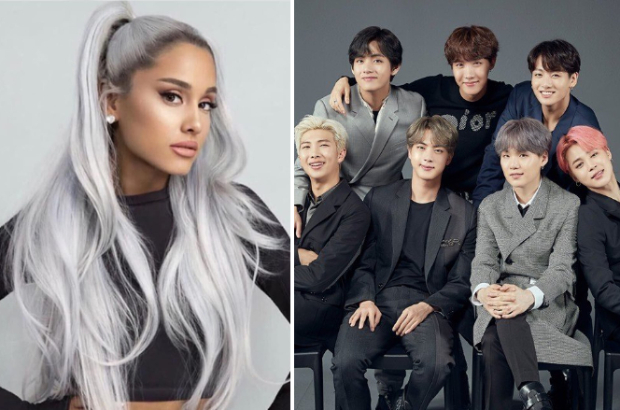 The 26-year-old singer had posted a photograph with BTS sans Suga on her social media account. "Look who I bumped into at rehearsal :)," the 'Thank U, Next' singer tweeted.

look who i bumped into at rehearsal :) pic.twitter.com/7VUjB3CMLX

At the Grammys red carpet, RM spoke to Entertainment Tonight about meeting Ariana and said, "She's the one right now, she's the one. So when Ariana is just practicing next to our big studio, we just knew. She said she wanted to see our rehearsals and what we're doing. We showed her... and we saw her rehearsals, too, so we know what we're doing tonight, what she's doing tonight, and it was, like, the greatest."

Now, responding to the same video on Twitter, Ariana Grande said that she saw a rehearsal of their performance, seemingly 'Black Swan' which they set to perform on January 28 on The Late Late Show with James Corden, and was incredibly impressed by it. "honestly...... i was able to watch them rehearse for something and it was the most incredible thing i’ve ever seen. i’m not kidding. i was screaming. i couldn’t stop talking about it / still can’t."

honestly...... i was able to watch them rehearse for something and it was the most incredible thing i’ve ever seen. i’m not kidding. i was screaming. i couldn’t stop talking about it / still can’t.

BTS ARMY! Are we ready for yet another iconic performance?