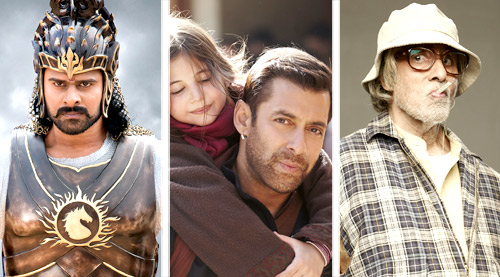 Bahubali has been adjudged as the best film at the National Awards. It is a hugely commercially successful film but it also came in for criticism for having layers of misogyny and regressiveness. Gujarat has been adjudged as the most film friendly state even though Raees makers repeatedly faced tough times during its shoot recently. Nawazuddin Siddiqui delivered stellar performances in Manjhi The Mountain Man and Badlapur while his supporting act in Bajrangi Bhaijaan was laced with class. He goes completely unnoticed. National Awards are primarily a recognition of the brilliance of regional cinema but it is mainstream Bollywood that has bagged almost all the top honours. So, the question that needs to be asked is that, are National Awards going the Stardust-Filmfare way?

The best film critic award has gone to Meghachandra Kongbom from Manipur (a state where Hindi cinema is banned). Best editing award goes to Parvin Angre and Shridhar Rangayan for the latter's documentary Breaking Free on the manner in which section 377 is being misused to throttle the lives of the LGBT community. Gurvinder Singh's Chauthi Koot, Raam Reddy's Kannada debut Thithi and Bhaskar Hazarika's Kothanadi are a few honours that have found deserving favours but the usually prolific Bengali and Malayalam cinema has gone unnoticed.

All the mainstream awards, be it best actor, actress, director, cinematographer, choreographer, lyricist etc. have gone to Hindi films. Mr Bachchan was brilliant and extremely entertaining in Piku but it was a superlative supporting act and doesn't really qualify for the best actor category in the first place. Marathi cinema is making tremendous inroads in the last few years in writing, performances, cinematography. It has largely gone unnoticed (except for bagging best debut in the non-features section for Daavratha).

The much deserved recognition for writers Juhi Chaturvedi (Piku), Himanshu Sharma (Tanu Weds Manu Returns) and Kalki Koechlin (Margarita With a Straw) is welcome. But the social media is abuzz with the debate that there are several aberrations in this year's national award winners. It is not entirely possible to rise above pressures of various hues and shades but attempts ought to be made to retain the sanctity of National Awards. After all they are considered the most credible film awards in India. Please post your thoughts in the comments section below.