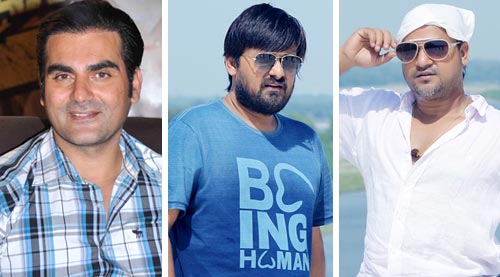 Arbaaz Khan is happy that his continued association with Sajid-Wajid has paid off again. While the composer duo had delivered chartbuster score in both Dabangg as well as Dabangg 2, one wondered if a hat-trick was pretty much on the anvil with Arbaaz's third production Dolly Ki Doli as well. The soundtrack was pretty much being keenly observed also due to the fact that this is Arbaaz's first film ever which doesn't feature Salman Khan. Since Sonam Kapoor is the central protagonist in the film (and the biggest star face), it was a task indeed for the makers to come up with a musical album that stood out as a hardcore commercial affair.

As has turned out, the team has managed to arrive at an out and out massy score, hence resulting in yet another successful partnership between Arbaaz and Sajid-Wajid.

Says an insider, "For Arbaaz and Sajid-Wajid, there was a lot of stake with the album. They had to get it right because this time around, they were the biggest stars on the film. The music had to speak its own language and there was no Salman Khan cushion available either. Even though Arbaaz was in the decision making capacity right from the days of Dabangg, it was his name that was on the board that shone the most. He didn't want to cut any corners either, even though the money involved was much lesser than Dabangg series. Sajid-Wajid got a simple brief - 'Deliver a score that matches their best, if not surpass it."

The composer duo obliged too and worked for weeks at stretch to hand over multiple tunes to Arbaaz, before he selected his Top-5. For a dance number he picked on 'Phatte Tak Nachna'. For an item song, it was 'Fashion Khatam'. For those who wanted to get all romantic there was 'Mere Naina'. For the youth it was 'Babaji Ka Thullu'. As for a theme song, it was a fun filled 'Dolly Ki Doli'.

"The idea was simple, which is not to have a single dull moment in the album," says Arbaaz, "The music had to be instantly catchy and carry ample scope for bringing on good energy on screen. I knew that once Sajid-Wajid do their job, my director Abhishek (Dogra) and his team would have enough ammunition to keep things high paced and lively on screen. Sonam is already making waves amongst youth while Rajkummar (Rao) was always craving for a dance number. As for Malaika, she weaves her own magic on screen. With Varun (Sharma) and Pulkit (Samrat) joining in, the music is further accentuated."

Comparisons with Dabangg are obvious.

Smiles Arbaaz, "That franchise belongs to a different genre altogether. As and when Dabangg 3 arrives, it would have that brand of music. As for Dolly Ki Doli, I am more than happy and content with the outcome. It is tough to create music for a film that has a stage and setting like that of Dolly Ki Doli. To still have popular music being scored is an achievement by itself for Sajid-Wajid."