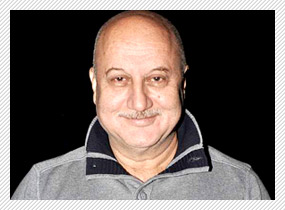 From the last week of February to the first week of April, the ever-prolific Anupam Kher has one release nearly every week.


Says the actor, "I didn't plan it that way. But unfortunately a bottleneck of my releases is coming up. On March 7, I have E Niwas's Total Siyappa. This I am very excited about because I get to be in the same film as my wife (Kirron Kher) for the first time. Then on March 21, I have Atul Agnihotri's production O Teri releasing. The following week (March 28) my dear friend Satish Kaushik's Gangs Of Ghosts is being released. And then on April 4, I have David Dhawan's Main Tera Hero. A month after Main Tera Hero is Habib Faisal's Daawat-e-Ishq. So you see, its Anupam Kher everywhere."


Anupam is not shaken by this overdose of his presence at the turnstiles. "I've been through these theatre traffic jams before. The advantage of being the actor that I am is, I am not the same person in any of the 5 releases that are coming in March, April and May."


When asked him to stick out his neck and select his favourite among the crowd of releases in the coming months, Anupam says, "I enjoyed them all. But working with Habib Faisal, Aditya Roy Kapoor and Parineeti Chopra in Daawat-e-Ishq was a very special experience. They are so talented. But I am not saying it's my favourite among my forthcoming releases. I liked all of them, for different reasons."