Over the weekend, actors Anupam Kher and Boman Irani took to their respective Instagram handles to share a video where they were seen as Khosla saab and Khurana saab, their characters from the movie, Khosla Ka Ghosla. The actors brought back memories of the hit film when they boarded a helicopter in Nepal. 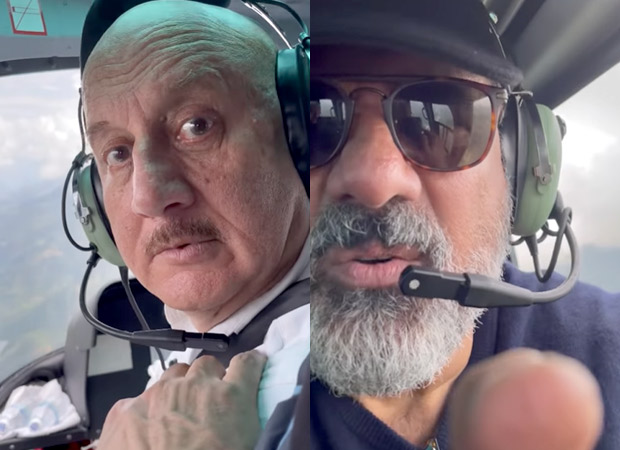 In the video, Anupam was seated beside the pilot when a hand reached out to him from behind the camera. “Uncle ji,” Boman said, leaving Anupam horrified. “Khurana saab,” he responded. “Kaunsi picture dekh rahe ho helicopter mein? (Which film are you watching in the helicopter?)” Boman asked. “Khosla Ka Ghosla,” Anupam replied.

Anupam shared the video with the caption, “Khurana Saab is taking #KhoslaSaab to show him a new plot of land in Nepal. Khosla ji without consulting his family has agreed to see it. But he seems little petrified! Because #Khurana is smiling in the same way as he did when…”

On the other hand, Boman shared the same video with the caption, “Khosla Saab and Khurana Saab in the same helicopter. Not by chance my friends! Actually showing him a new plot! Not in #NewFriendColony but this time in Nepal!! Hahaha.”

The video left fans in splits as they dropped laughing emojis in the comment section. “That’s a classic!” a fan commented. “This one is really epic!!” another fan said.

Directed by Dibakar Banerjee, Khosla Ka Ghosla was released in 2006 and revolved around a middle-class family's attempt to reclaim their land which has been seized by a builder. The film won the National Film Award for Best Feature Film in Hindi and was remade in a few other languages.

Meanwhile, Anupam and Boman are in Nepal to shoot for their upcoming film Uunchai. The film is directed by Sooraj Barjatya and marks Anupam's fourth collaboration with the filmmaker. Previously, they have worked on Hum Aapke Hain Koun..!, Vivah and Prem Ratan Dhan Payo. Uunchai also stars Amitabh Bachchan, Parineeti Chopra and Neena Gupta.

Also Read: Anupam Kher reveals he owns no property in Mumbai; says has only one property in Shimla for his mother