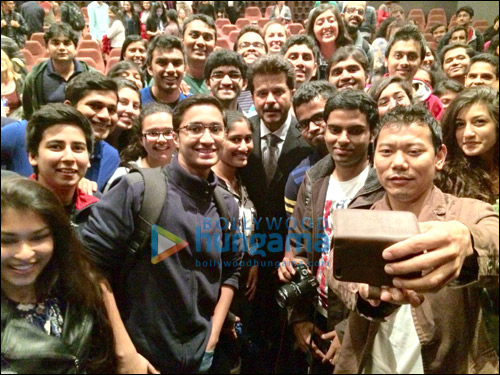 Anil Kapoor flew all the way to Indiana in the US on October 7 for a very special screening of his most iconic film Mr India.

The 1987 blockbuster starred Anil Kapoor as an invisible man. Said to be one of the first super-hero films in Bollywood, Mr India remains to this day the most popular film of Anil, his leading lady Sridevi, and Amrish Puri who played the iconic arch-villain Mogambo.

Says Anil, "It was an amazing experience. The first thing I asked the curator John was, 'Why Mr India? Why not any of my other films? He said there were many reasons. Most of all, because Mr India is India's first real super-hero film."

Anil Kapoor sat with the students and the faculty to watch the film. "It was three hours long! I asked the students if they wouldn't be too exhausted for the Q and A after watching the film for three hours. They not only sat glued to the film they all stayed on for the interaction. I had forgotten the length and the content. I must have watched it 25 years ago. Did I like what I saw? Yeah, the film hasn't dated at all, except for a few sets which look like sets. The Indiana University students were amazed that my character's home in the film was a set. They said it looked too real to be a set."

Watching Mr India after so long Anil says he liked Amrish Puri the best. "What an actor! And what a performance. Not one flawed moment. Every time he said, 'Mogambo khush hua' the Indiana University audience broke into applause. I also loved the performances of the late Ajit Vachchani, Sharad Saxena, Anu Kapoor and Satish Kaushik. I liked myself the least. I could've done a lot better."

Anilu Kapoor said he was as curious about the students as they were about him. "I had as many questions for them as they had for me. Understandably they were not only asking about Mr India but also about my other films, about my life and career. They wanted to know if we were going to do a sequel and who would play the roles. I said there would be a replacement for every actor. But no one can play Amrish Puri's part."

Watching Mr India with the American students after 25 years Anil recollected the whole process of making the film. "Shekhar Kapoor and I had a lot of arguments. But it was finally worth it. There is a timeless quality to the film."