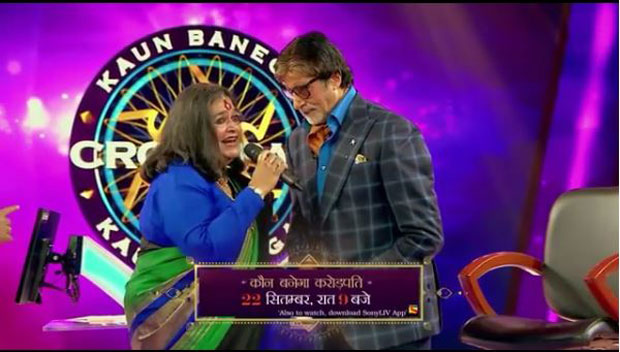 The new season of Kaun Banega Crorepati continues to retain its star studded element as celebrities often make an appearance during one of the episodes of the quiz show frequently. While it is not money that they often aim for, they generally use the money won during the game to support the causes they believe in. One amongst the host of celebrities is singer Usha Uthup who recently shot for an episode of Kaun Banega Crorepati.

The veteran singer Usha Uthup who has even been a part of Amitabh Bachchan films [like she played a club singer in the Bachchan starrer Bombay To Goa] was more than happy to meet the megastar. She not only sang a few lines but also made Amitabh accompany her in doing so and sang one of his own chartbusters. From what we hear, she also gifted a shawl to Bachchan.

She was accompanied Gauri Sawant, a transgender who works towards the development of her community. Usha Uthup and Gauri Sawant are a part of the show to support the latter’s dream of building houses for sex workers. Gauri Sawant has expressed her desire to work for the benefit for sex workers and will be using the prize money to build shelter for them in Kharghar, located in the harbor line of Mumbai.

A sneak peek into the episode was given on social media by the channel Sony Entertainment which airs the show every day.