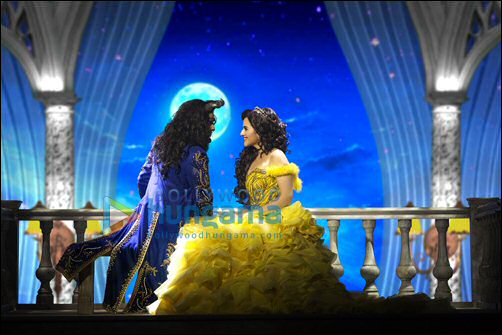 Over the years veteran actor Amitabh Bachchan has quite literally enthralled us with numerous roles. Now we hear the actor par excellence will

be lending his deep baritone voice for the Prologue of Disney India's Beauty and The Beast musical.

Commenting on the same Amitabh Bachchan says, "Disney is synonymous with large scale Broadway musicals and I was very pleased to hear that Disney India was bringing

alive the timeless classic Beauty and the Beast on the Indian stage for the first time ever. When Siddharth requested me to voice the prologue for the show, I

readily agreed. I am very happy to be a part of this pioneering effort to advance a new and unexplored format of entertainment in India!"

With the Beauty and the Beast Musical, Disney India aims to recreate the Broadway magic live on stage. Based on the Academy Award-winning animated feature film, this

classic musical love story will be presented to Indian audiences on the same scale as the mega-productions seen on New York's Broadway and on London's West End. Over

100 of the best musical theatre performers in India will bring the story of Beauty and the Beast alive on stage, with world class production values, lavish sets and

gorgeous costumes. Having won hearts across 28 countries, the Beauty and the Beast musical will be completely developed locally in India, while retaining the

original script and memorable music of the Broadway show. The production will be in English at 130 minutes in duration, with select shows across Mumbai and Delhifrom

Disney's Beauty and the Beast premiered on Broadway in 1994, where it was nominated for nine prestigious Tony Awards and ran for 13 years. It still ranks as one of

the longest-running and highest-grossing Broadway shows of all time. Since its debut, the titles visibility and success has expanded globally with subsequent

productions produced around the world. Since licensing of the title began in 2004, there have been productions in 28 countries, seen by more than 35 million people,

translated into 17 different languages with over 28 thousand performances - equivalent to a run of 67 years, generating over $1.7B in revenue.